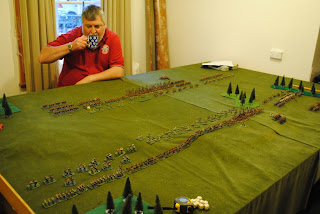 Peter's 1995 army was famous for being a heap of crap, but it still came second, beaten by Mark & tying with Jim.  Tonight the Ponts deployed most of their foot on a ridge in the centre, Chariots and low grade cataphracts on the right, grotty cavalry on the left - all screened by a horde of skirmishers. 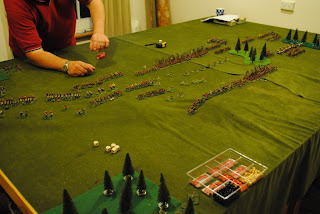 Mark advanced on the whole line.  On his left, his cataphracts stopped the chariots then with the help of Companions mopped up the rest of the flank.   On his right, the Pontic horse archers didn't do enough damage to make up for the quality difference & Mark eventually cleaned up that flank too.  In the centre, the Ponts on the hill held firm for a while, but they were outflanked on the left and doomed.

Once again the 1995 result was repeated with the M2M 2011 edition rules working nicely with the old lists. 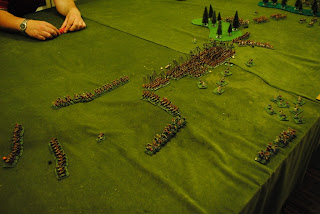 The pics are all taken from behind the Ponic left.  (The chariots in pic 2 are pointing the wrong way because they are routing)
Posted by Jim Gandy at Tuesday, January 25, 2011 No comments: 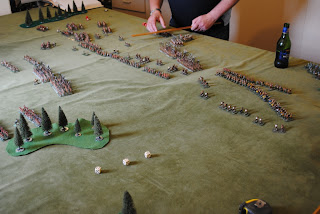 We decided to fight an "historical" battle.  The 1995 army lists easily transposed to the 2011 rules.  The same figures were used.  The player's hair had changed colour & in Mark's case there was a significant change in profile, but the result was the same as in 1995. 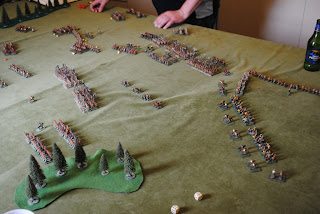 The pics are taken from behind Jim's right & the description below is from the same viewpoint. 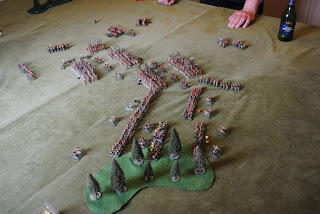 On the right Mark's barbarians advanced wheeling ponderously onto the enemy's flank.  Their skirmish screen was destroyed & they lost casualties to cavalry skirmishers, but the hoplites & the wood held them up until the battle was won elsewhere.

In the centre, Jim's barbarian charge was beaten off with small losses & the Phalanxes closed in to slug it out.

On the left, the cavalry fight had wins & losses on both sides, but Mark's cataphracts made the critical difference.  One tied up Jim's Companions, the other beat a big Heavy Cav unit, then rode down 2 Peltasts units to outflank the enemy centre.

With the right just holding on, the left destroyed and the centre being surrounded from the left Jim conceeded.
Posted by Jim Gandy at Sunday, January 23, 2011 No comments: 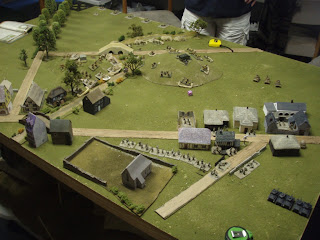 The Brits lost the toss & defended, placing 3 infantry down with 2pdrs in immediate ambush & with 25pdrs, MkIIIB, bugs & HMGs in Reserve. 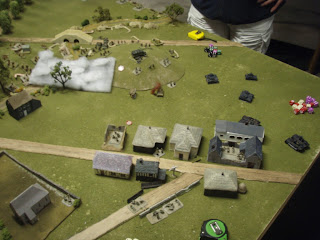 The Germans put down 1 Infantry, Mortars & HMGs - all close together in a village straddling zones 3 & 4 - with 38t's, Gerpanzerert Pioneers & another Infantry in reserve.  The Germans were content to wait for their reserves before attacking.  They were slow coming & the MkIIIB's came on first & attacked the Moratrs.  The Mortars were lucky to get away with only 1 loss before the 38T's came to the rescue.  The rest of the Germans reserves camme on soon after - all concentrated on the right. 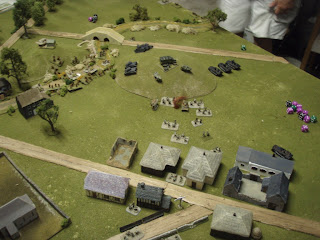 The German began their attack on the nearest objective with an Infantry platoon with suport from Mortars, HMGs & 38T's.  The MkIIB's counterattacked, but were destroyed by the 38T's.  The Infantry took the objective but was so badly mauled it was soon destroyed by a counterattack by the bugs.  But the 38T's took them out and the Brits were unable to stop the Panzers taking the objective, or to blast them off it.

All pics taken from behind the German right.
Posted by Jim Gandy at Friday, January 21, 2011 No comments: 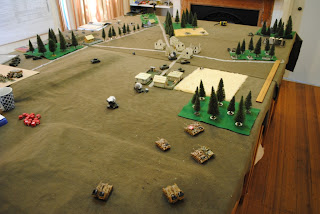 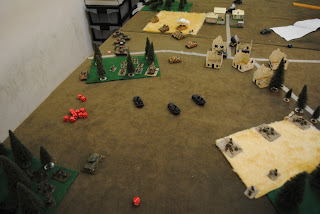 Both objectives were next to woods.  The Germans sent one P/gren platoon on foot to the closer objective & a mounted one to the other.  Their artillery & werfers were tucked away in a crowded quarter, Paks were placed in the with a field of fire between the objectives.  Stugs & Marders in reserve.

The US put Engineers & Shermans in flank reserve, 105 & 76 Shermans in the centre, Priests in rear & infantry threatening the German artillery.   The US tanks in the centre moved forward carefully out of range or LOS of the Paks.  The Stugs came on 1st turn on the flank of the 76 Shermans, folowed by the Marders on turn 2.  The Shermans turned to fight, but were destroyed for no loss.  But the US also got good reserve dice, their Engineers coming on turn 3 & the Shermans on turn 4.  The P/grens in the central wood were quickly over-run & the objective taken.

The Stugs, followed by the Marders, rushed across under fire & managed to contest the objective with 1 Stug in the nick of time.  The Stug died, but it bought time for half the other P/grens to remount their half tracks and rush over to retake the objective, clearing the wood of both engineers & tanks.

The final action was a shoot out between the remaining armour.  Only 3 Marders survived but the US had nothing left to contest the woodsd full of P/grenadiers.

Another exciting see-saw FOW battle.  Pic 1 is behind the Stugs & Marders where they came on.  There are 2 burning Shermans, the others ran off.   Pic 2 is from behind the objectives.  A Stug contests the objective, the armour shootout is beyond it, the mounted P/grens are coming up in the foreground.
Posted by Jim Gandy at Sunday, January 16, 2011 No comments: 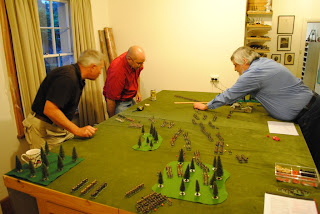 Parliament lined up conventionally with cavalry on the wings & infantry in the centre coveirng the whole field. But the King's men deployed entirely on their right with cavalry in reserve behind their left. 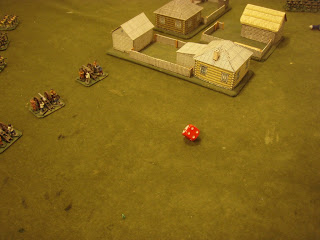 The Royalits had a strong cavalry force on their far right intending to push down the table edge around the wood & into the Roundhead rear.  This came unstuck when the Roundhead cavalry blocked the gap & refused to die.  This left much of the Royalist cavlry stuck on the flank with nothing to do while the battle was being decided elsewhere.

In the Royalist centre, they had pikes in the central wood, but they advanced out of it & the Roundhead cavalry recoiled back. Royalist musketeers entered the other wood to face off the Roundhead dragoons for the duration. 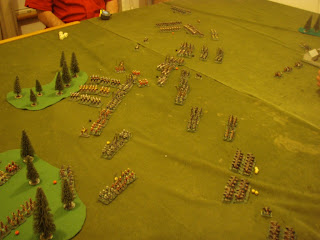 The crux of the battle came when the Roundhead cavalry on the right eventually got over to attack the  Royalist flank.  The elbow in the Royal line was vulnerable to any failures and when Oakie made the dice stand on end, the second grade Royalist cavalry broke and their line was compromised.

The Royalists tried to send some cavalry across from their left, but it was too late & it only rode to its doom as the Royalist left collapsed into chaos. 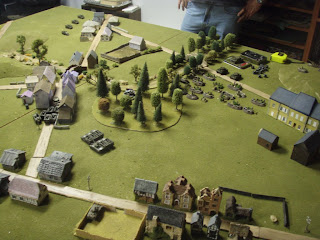 Nick used his recon move to grab an objective on turn 1 to gain an initial advantage.  Pic 1 shows Nick's recon and infantry rushing the village on the left while Steve is advancing from the top right.

Nick then pinned down one Steve's infantry platoons with artillery and they refused to unpin for far too long to be fair. 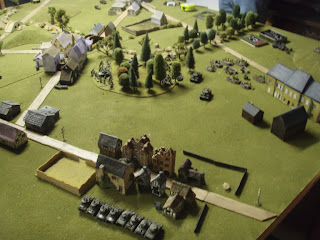 The Shermans came on from reserve and skulked behind the village in the foreground out of sight of the dreaded Tigers, but it was the infantry fight that was important.
Steve's attack through the wood drove the US infantry back out of the wood and into the village, but Nick held the second line to hold an objective on turn 6 to win the battle.

It was a tough ask for Steve as defender in this unfamiliar mission, but Nick had a better grasp of the essentials of the mission than Steve and exploited that to the full.

Nick's Armour will fight Jim's Panzergrenadiers in the Grand Final.
Posted by Jim Gandy at Monday, January 03, 2011 No comments: