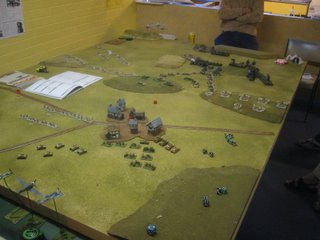 We used the Battalion rules for Company Morale (one platoon fails = it's pinned, two failed = game over).
Peter Williams dropped in for while but couldn't stay to fight. The Take Away Mission came up Spuds after Hungry Jacks was vetoed.

The Axis deployed Germans on the right, Italians on the left.
Both Axis armies were heavy on the anti-tank guns - the only armour being 4 Marders & 6L6 light tanks.
The Russians deployed entirely on their left opposite the Germans.
They had a mix of T34s (2x10), light tanks, SUs & KVs - no grunts except for the commanders.
Both sides had limited air - Sturmos & Focke Wufs.

It was a really enjoyable battle with wildly varying swings of fortune, so everyone had their turn at getting their rocks off.
By turn 2 it looked to be an Axis walkover after 2 Ivan tank coys had been splattered by anti-tank fire following a perhaps too enthusiastic advance.
Two turns later after the Sturmos & the surviving tanks had taken out 4 anti-tank batteries and the 88s were occupied with AA work it was the Axis feeling nervous.
But the Ities counterattacked the Russian rear echelon and Iavns casulaties were mounting - Nick's company was pinned and Starn & Corenna's leaderless.
Nevertheless, Starn's T34s had cleared a path diagonally across the table to avoid the 88s & Marders and were storming forward towards the Itie's thinly held rear objective.
On turn 9 the Luftwaffe finally showed up. A lone Focke Wulf finished off the T34s and forced a Company Morale Test that couldn't be passed.

The Axis claimed victory 3 times over:
1. Russians failed morale.
2. Russians failed to get into zone 2 by turn 10.
3. Russians held no objectives (the L6's had taken back the one taken from the grenadiers).
It was a hard fought win - the Germans had lost 2 of 6 & the Ities 4 of 9 platoons.
Posted by Jim Gandy at Wednesday, November 23, 2005