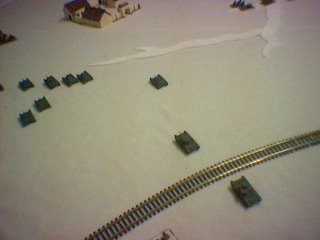 Disaster on the Don version 2.

Starn and Coreena dropped by to give their Germans a run in Flames of War. I rolled up terrain from Za Stalina -- and again the Russian steppes were flat. Major terrain was a farm in the middle of the table, a railway embankment (that blocked line of sight), and SNOW.

The Germans had a grenadier army, containing a tiger and two 88's. The Russians had a horde of T-34's, a horde of T70's, some mortars and some infantry. The scenario was breakout.

The SNOW was a killer for the Russian tanks -- they had to make a bogging roll every time they moved! And they couldnt double move, killing the T34 maneuver advantage! And just like the last time, the Russians lived in fear of the 88's and tiger.

The Russian's had 11 x T-34s on a flank march -- over 1/2 of their army. So they couldnt do much until the flank march came on. The Russians tried to run their infantry to the farmhouse in the middle of the board, but lost the infantry to a mass bombardment of nebelwefers, 75mm infantry guns, heavy machine guns, and the tiger. The Russian mortars were taken out by the 88's. So for several turns the Russians and Germans just sat and watched each other -- the only movement being Starn rushing his tiger back to guard an objective.

The T-34's finally came on, and they concentrated their firepower on the 88's. At the same time the T70's attacked from the other side of the board. The initial salvo of the T-34's was aimed at the 88's -- and did no damage. And the retribution was terrible -- 5 T-34s were killed by the tiger and the 88's, and another two bailed. The Russians survived a morale test, and tried again, taking out an 88. The T-70s took out another 88. And the tiger missed! So no further morale check!

The 5 remaining T34's rushed the vacant objective. The tiger killed another 2, but the remaining tanks survived a final morale check, and won 5-2 (holding the objective).

It was a hollow victory -- the Germans lost 3 teams in the whole game, while the Russians lost just about everything -- they had 3 T34's and some T70's (mostly bogged in the snow) left! The Russians only won by surviving 3 morale checks -- this is where fearless morale helps!
Posted by Nick at Wednesday, January 25, 2006