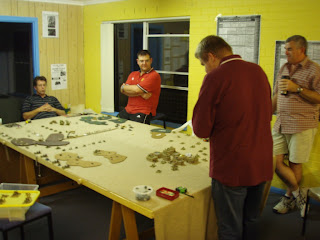 On the Allied left Jim's Poms faced Starn in an Encounter Mission.
On the Allied right Agro's US faced Doug in a Breakthrough.
Chris umpired.

The Breakthrough deployment zones divided half the table into quarters so Agro's deployment zone was on the Brit right flank & his objectives were in the far right corner of the table. The battlefield was diced up desert & pretty open. The Brits stepped back to good old WWI tactics - 2 Infantry platoons advanced while their double 25pdr battery & heavy mortars softened up the Krauts. Starn tried to dig In & weather the storm praying his reinforcements would come soon. Agros deployment was cramped by the small space available & Doug's priority Stukas had a field day. This goaded Agro into making hasty attacks to make more space with very unfortunate results.

On the Brit front the 25pdrs reduced the Neblewerfers to a single piece in one Stonk, then turned on the Grenadiers on the central objective. The heavy mortars wiped the 88s in 2 turns then joined in on the Grenadiers. The Brits only problem was their so-called allies - bloody Yanks - can't even be relied upon to be decent targets - the Stukas suddenly came across the table after more worthwhile targets. The Infantry on the left got a hammering while those on the right got off with a lot of good saves & the CICs help in unpinning.

But the Yanks weren't quite finished yet - their Shermans came on in flank attack and took the far objective. But they were too early & couldn't hold it against a pioneer counterattack. With the loss of the Shermans, the yanks failed morale leaving the Brits on the their own (so what's new). Despite the attentions of the Stukas, the Brit Infantry got to both objectives before reinforcements either from reserve or from Doug could arrive. In the centre, the Grenadiers had been pounded to a shell by artillery & there was little for the Brit Inf to do but bayonet the wounded & take the position. On the right, the objective was defended by just German HQ & it was quickly over-run. But the German reserves had finally arrived in time to counterattack. Grenadiers retook the left objective finishing off the job the Stukas started (annihilating the Brit Infantry there) while the Tiger disputed the central objective. The Brit Infantry surrounded the Tiger, it failed morale & had to surrender leaving the Brits in control of the objective.

So both sides had a win & a loss, so the battle was a tie. Everyone enjoyed the multi-players, multi-mission format. 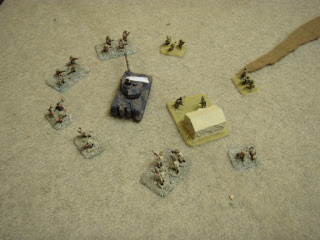