Chris & I are again going to Cancon to play Bolt Action.  With the big table at Camp Cromwell occupied by Napoleonics and the small one covered in stuff, Chris & I went to Good Games for Cancon practice this afternoon.  We tried out the Tank Battle Scenaro from the BA Tank War supplement with 1500 pt armies. 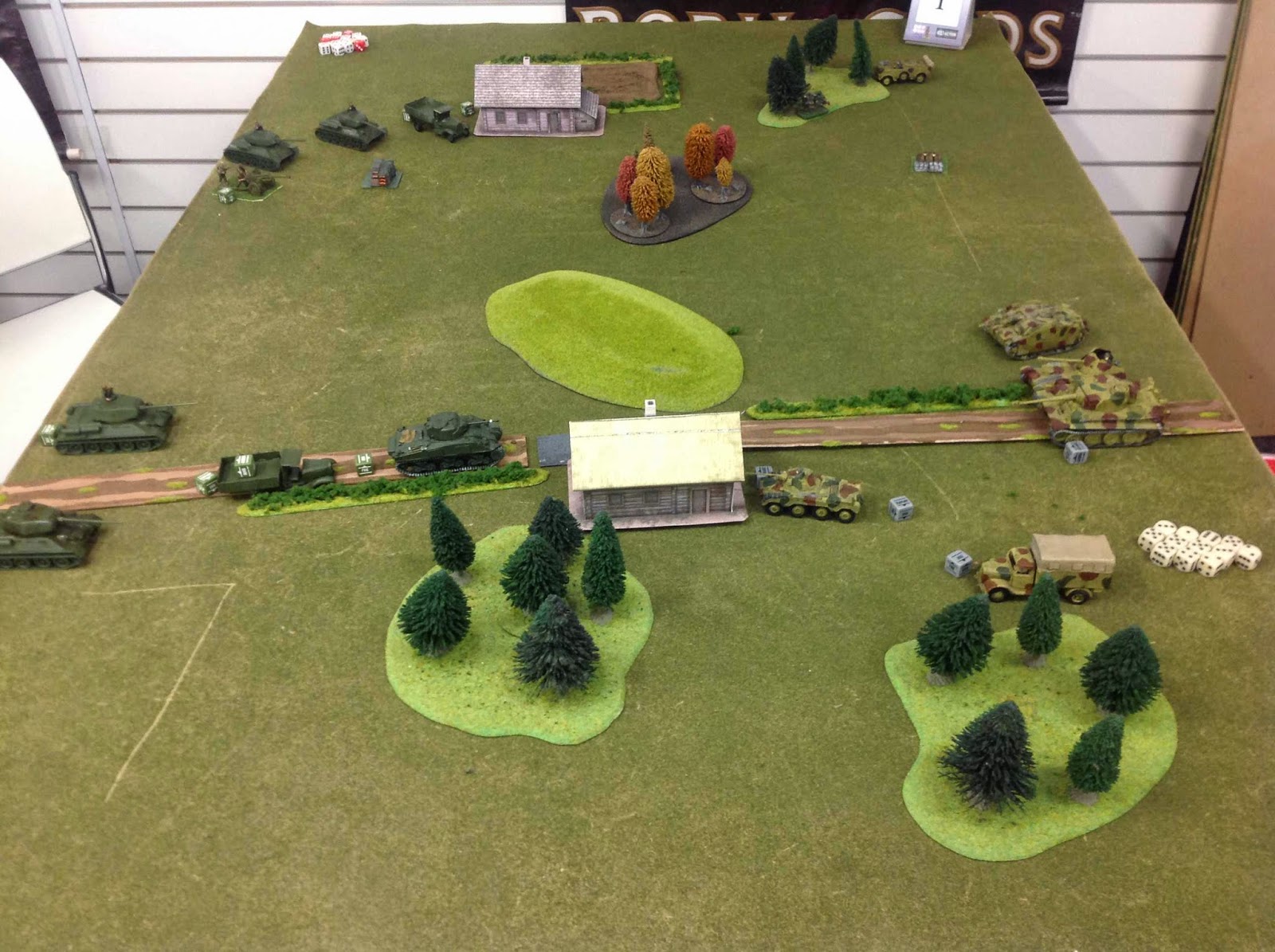 There are 3 objectives on the table, one on each side about 2/3 up the table & one on the road behind the house.  (The no. of objectives is diced for in this scenario).  The Germans are coming on the right & the Russians on the left. 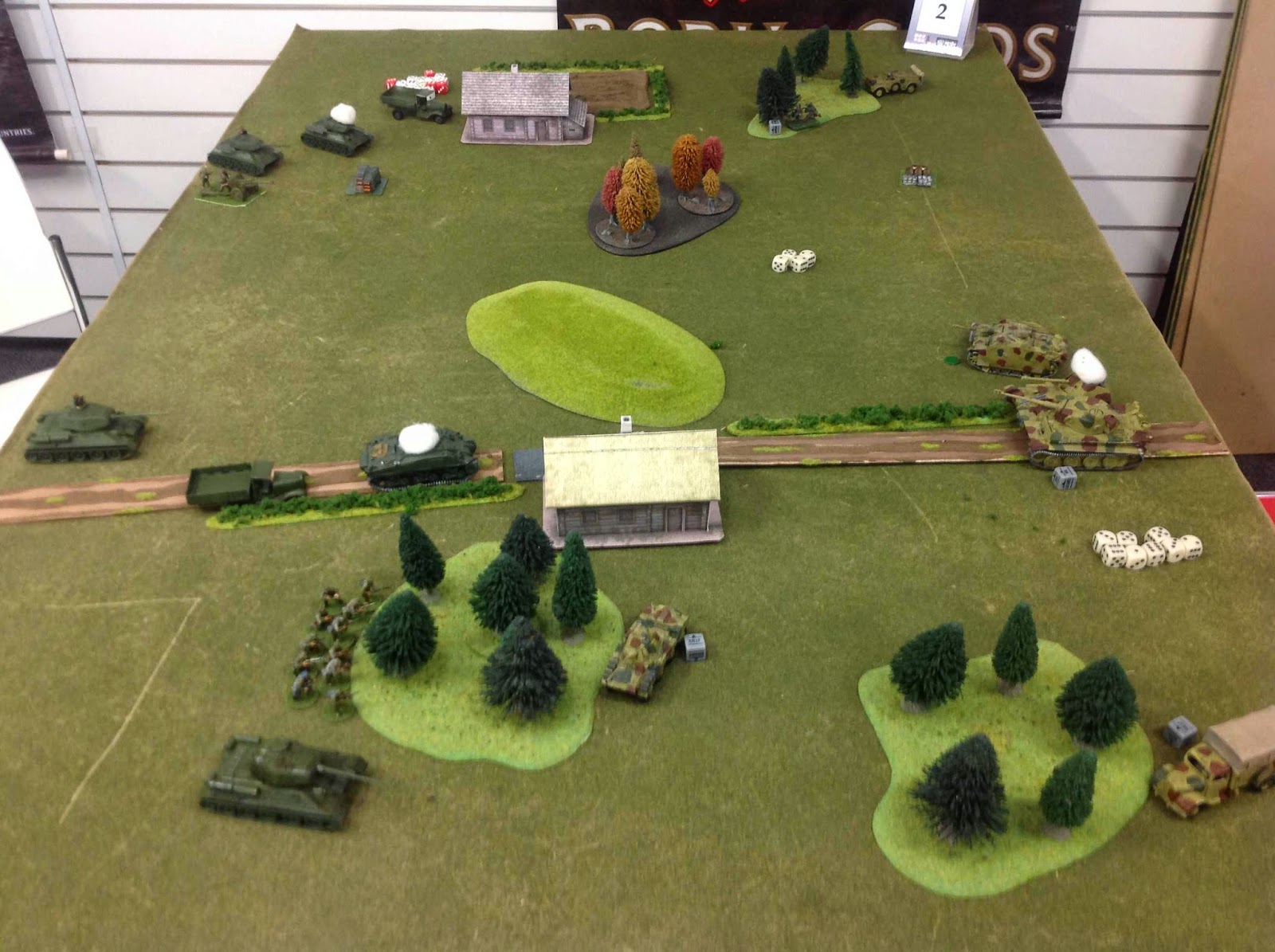 In the foreground, the panzergrenadiers won the race for the house.  Soviet infantry have occupied the house at the far end.  The armour is engaged in a long range duel.  The Marder died fast, but the Tiger has been making itself felt. 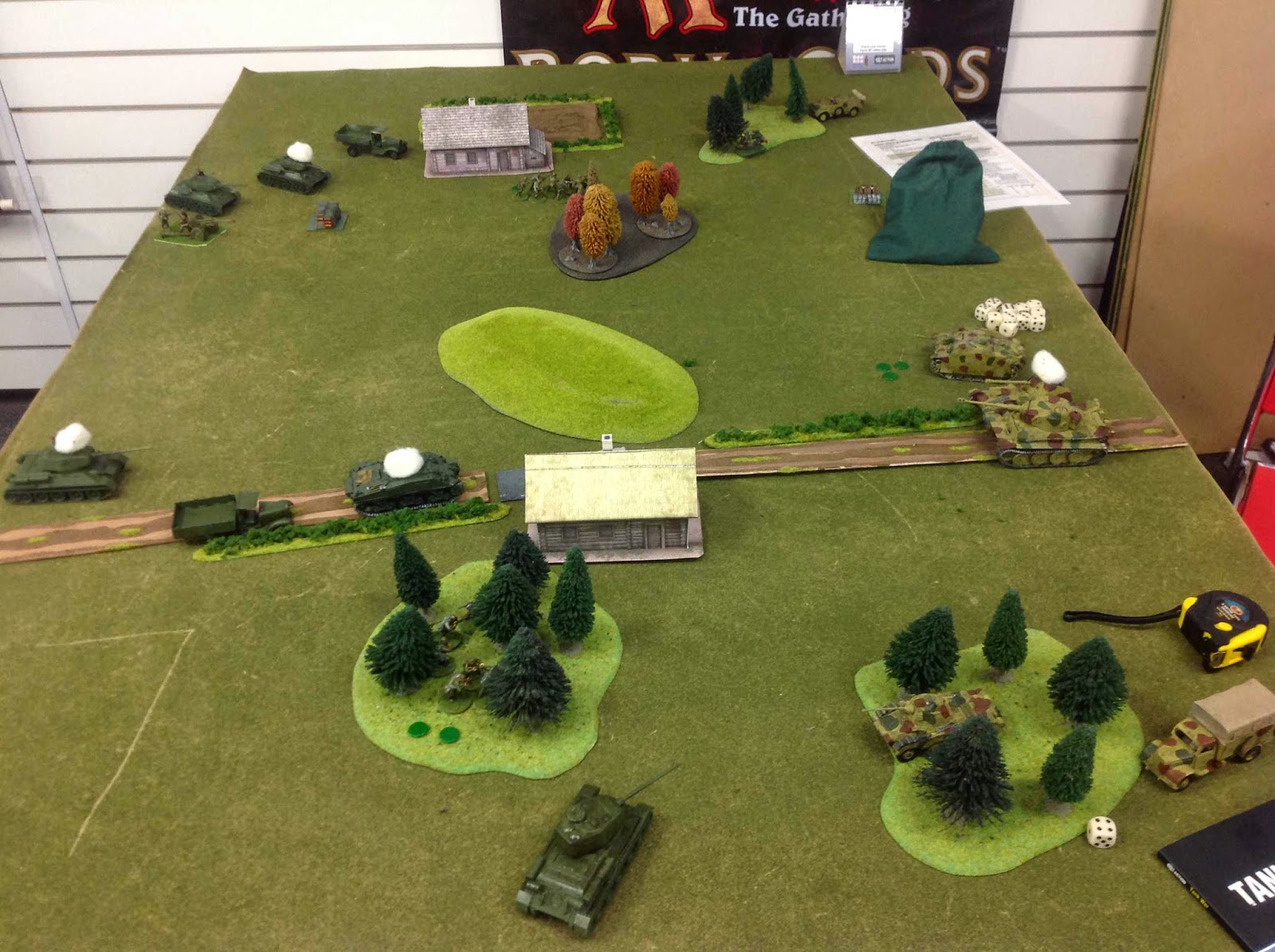 On the far flank the inexperienced Soviet infantry are advancing towards the objective opposed only by a panzerschreck team.  On this side the veteran Soviet infantry are preparing to storm the house full of panzergrenadiers.  The Tiger has scored another kill while the Stug is alive, but pinned down. 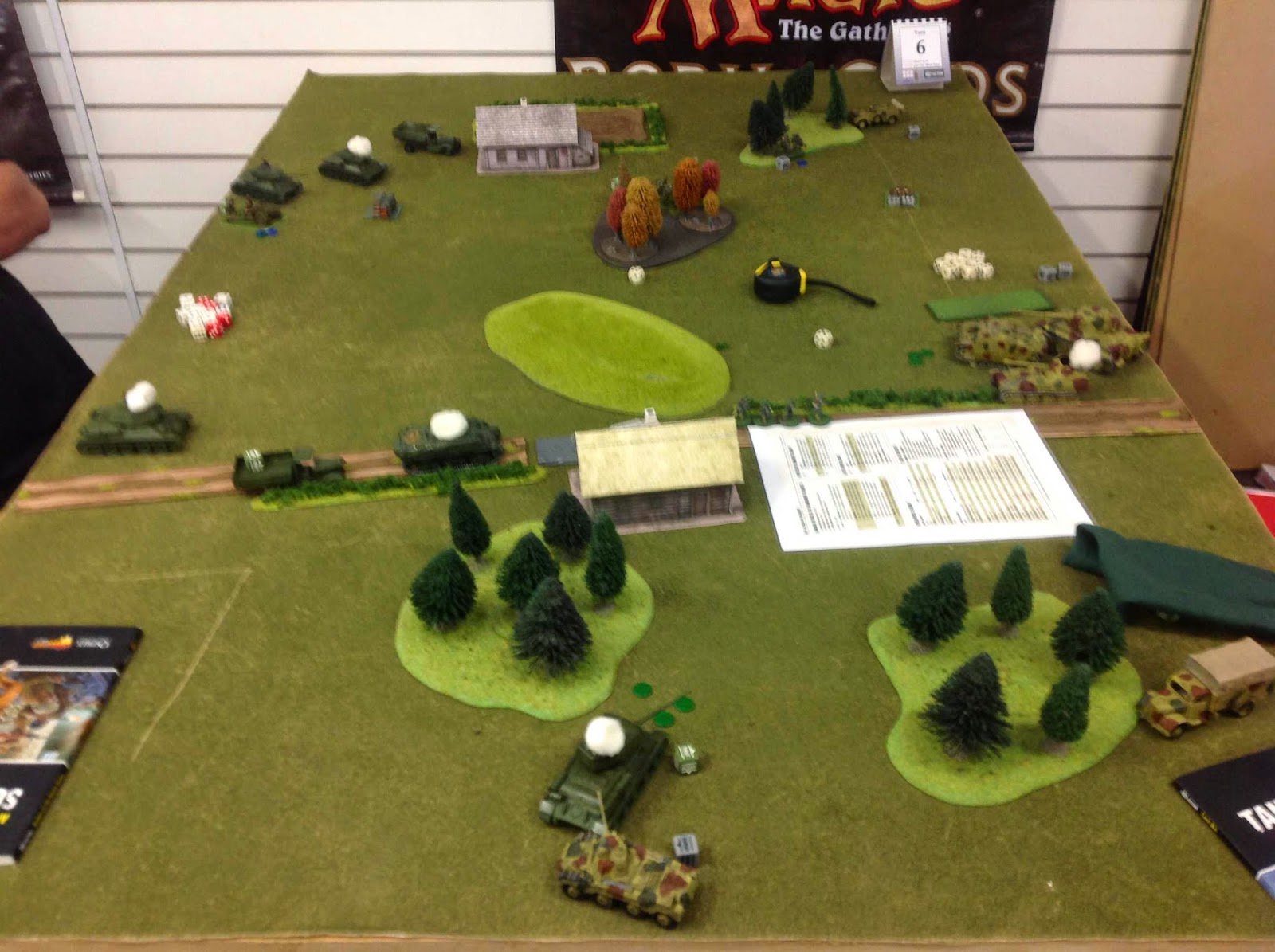 The Soviet charge on the house was a bloody affair with the Soviets armed with smgs & the p/grenadiers mostly with assault rifles, but eh Germans won and maintained control of the objective.  In the foreground the Puma won a game of hide & seek with the T34 & put a 50mm round up it's clacker. The Soviets on the far flank had been pinned down by the panzerscheck team but are again on the move. 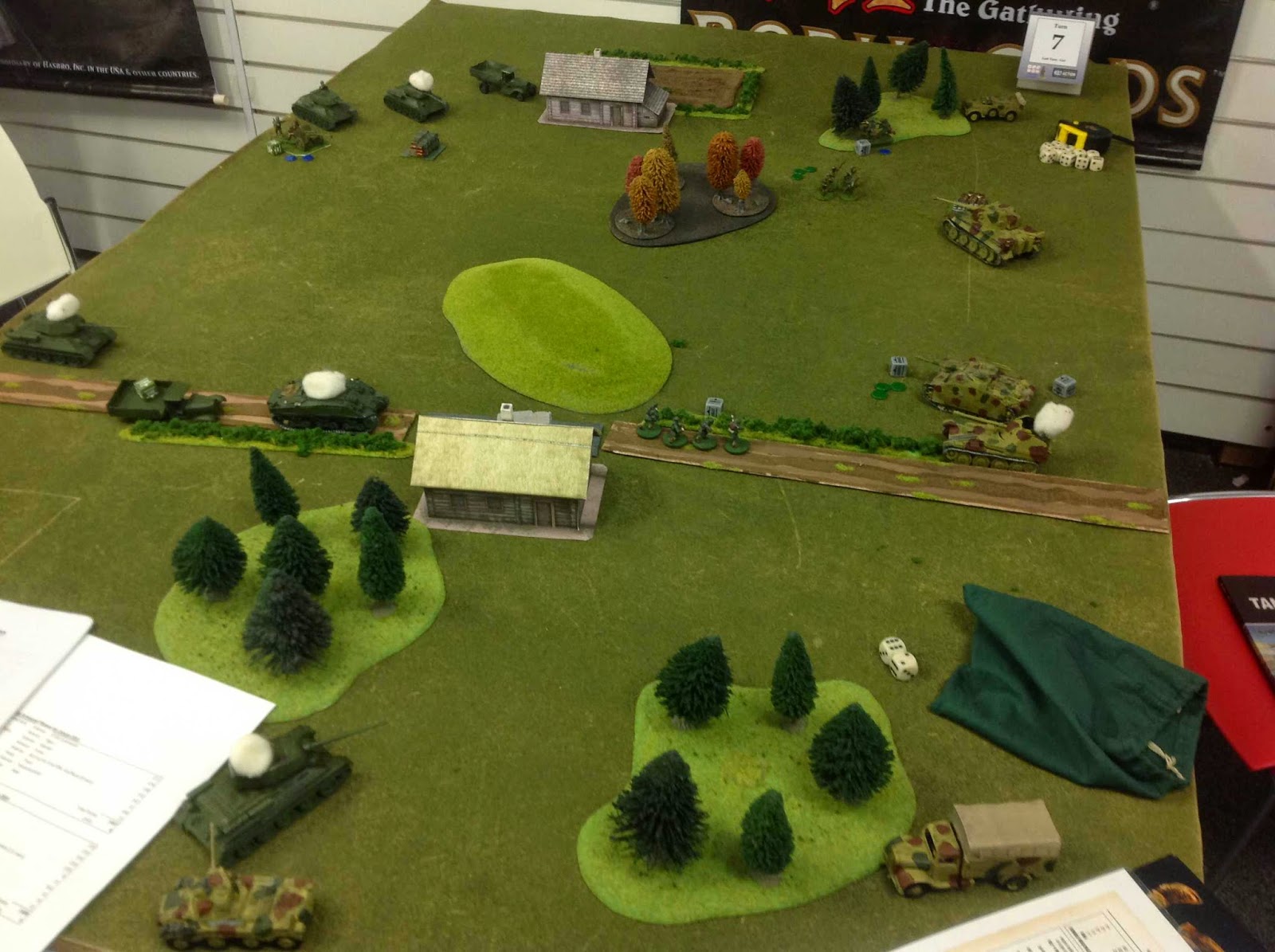 In turn 7, the Soviet infantry shrugged off their pins and advanced within 6" of the objective on their right.   The Tiger doubled over to dispute the objective.  The Stug with 3 pins failed to activate  the p/grens didn't get enough hits to drive the Ivans away.  So both sides have 1 objective & 1 is in dispute.  If the objectives are split, then the tie breaker is killing 2 more enemy than you lost.  The Soviets have lost 4 tanks & an infantry squad, the German have lost their Marder, so win 5 kills to 1.

This was our first try at BA armoured since the book came out.  It went a bit faster than most 1000 pts infantry fights, taking about 1 & 1/2 hours and was great fun.  Love my Tiger.
Posted by Jim Gandy at Thursday, November 20, 2014