The Devonport Tabletop Gaming Club is running Operation Sudlicht, a one day Bolt Action tournament next weekend.  This week we had some practice games at Good Games. 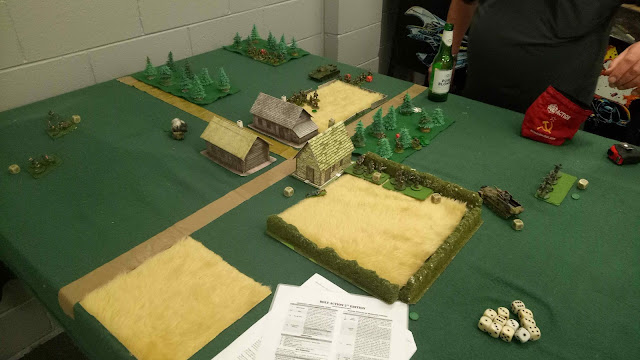 On Wednesday: Mark's Soviets v. Jim's Panzergrenadiers in a Point Defence Scenario.  This is an attacker/defender scenario where the attacker has 3 objectives.  The attacker wins by taking 2, the defender wins by keeping all three.  The Germans attacked.  They grabbed the objective just off shot to the right but couldn't get a second one.  We find this scenario tends to be a draw as it's very hard to defend all 3 & very hard to take more than 1. 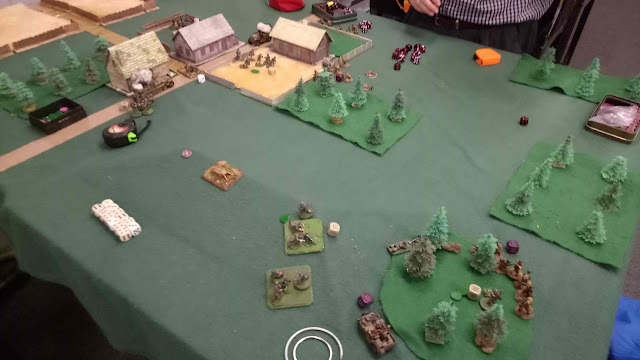 This afternoon John's British Commandos took on Jim's Panzergrenadiers in a Key Positions scenario.  This mission has D3+2 objectives placed alternatively by the players 12" min apart - before deciding table sides.  Today there were 3 objectives  - one on the hill in the foreground, one on the road junction & another on a hill just off-shot towards the far corner.  The Brits put 3 units on flank attack to attack the RH objective.  The Germans put all their forces on the table & pushed forward to take the centre objective & fought a delaying action on their right.  The Germans had far higher casualties but the lack of a 7th turn allowed them to hang on to 2 objectives at the end of turn 6 to win.  A 7th turn may well have swung the battle the Brit's way.
Posted by Jim Gandy at Friday, June 23, 2017

You should do that - it's at the Showground from 10am. There are 16 entries - BA seems to have taken over from FOW as the most popular WWII game in Tas.