Due to a widespread deficiency in Brownie Points in the BA@GG crowd there was no action at Good Games this Sunday, so I went to Barrie's for another go at Sharp practice. 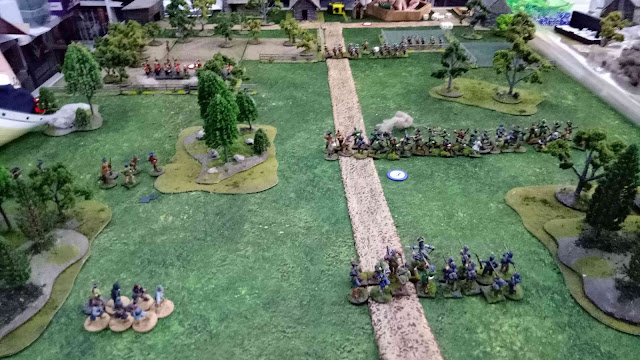 We did the same scenario as last week, but this time we knew a bit more about what we were doing. I commanded the Americans on this side of the table.  Darren & Jake commanded the Brits at the other end while Barrie was pretty well occupied looking up the rule book. 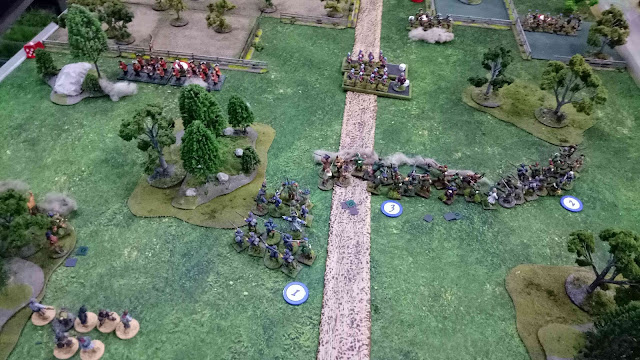 The Americans sent skirmishers down the left flank & their regulars up the clear ground in the centre using woods to cover their flanks.  The Brits sent their best unit down their right flank where it got bogged down v. the American skirmishers.  On the other flank their troops got slowed down by the orchards & Jake's bad movement dice.  In the centre, Daren got a bit over-enthusiastic & got his Scots into a ring of fire. 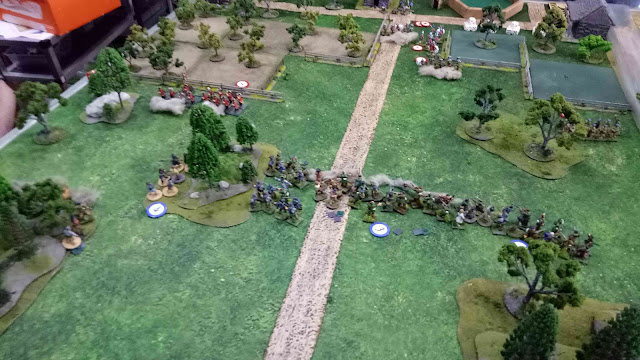 The Scots in the centre were routed by concentrated fire.  Eventually Jake's Scots on the Brit left got into action around the wood, but the Americans pulled their right flank back & held them.  On the left the Americans redeployed the column on the left of their main line through & around the wood & drove the British right back into the orchards. At this point the mysterious morale counter had the Brits verging on collapse & they conceded the battle.

This was my 3rd try at Sharp Practice. While I am still quite mystified by many of the intricacies of the rules, it is apparent that the rules can punish mistakes & reward good tactics.  While the  pace of play will speed up as the group learn the rules, I remain of the opinion that the rules are overburdened with bells & whistles that do nothing to help the use of tactical skill but slow the game down too much.  But while my taste is for simpler rules, I've seen much worse & when in Rome one must do as the Romans do.
Posted by Jim Gandy at Sunday, February 04, 2018

Thanks for the sound thrashing, Jim. I'm always out of my comfort zone playing offensively.