The real Marengo campaign culminated in a big battle at Marengo about 10 km east of Alessandria.  Our campaign also lead to a big battle near Alessandria, in our case about 10km to the north & a bigger battle than Marengo because our wargaming generals took longer to get there but came with a larger proportion of the available troops. 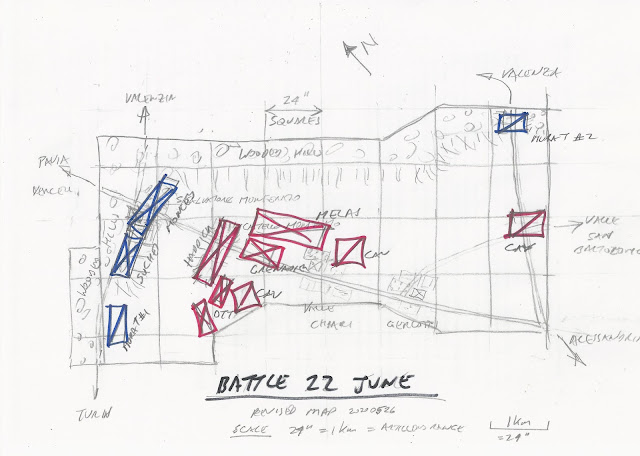 Two days previous the Austrian army had moved north from its supply base at Alessandria (off the bottom left of the map) to find 2 French Corps deployed to their front in hilly wooded country.  Having learned the hard way in previous battles how hard it is to fight the French infantry in rough terrain (given his own army's doctrine of linear tactics & the French skill at skirmishing) Melas was reluctant to attack.  He deployed his advance guard on a ridge about a km south of the French position & the rest of his force behind it.  Next day Melas sent strong cavalry detachments out on both flanks to try to find out where Bonaparte was.  They found nothing to the west or to the east, but the cavalry on the Valenza Rd (top right of map) was pushed back by superior French cavalry.

Normally we use a ground scale of 36"/km, but at this scale the battlefield would not fit on the table space available & we'd struggle to field enough suitable figures.  So the battle was set up with a ground scale of 24"/km & the number of units reduced to 2/3.  So our standard 12 figure infantry units represented 1125 men rather than 750. The table was 16' long, 8' wide at the ends & 6' wide in the middle, with a 4'x1' tack-on at the western corner.  The rules are our Camp Cromwell Action house rules.

The current C19 rules now allow 5 players at the table, we had 4 on the table & 4 others took an active part via Zoom, some of them in Canberra. 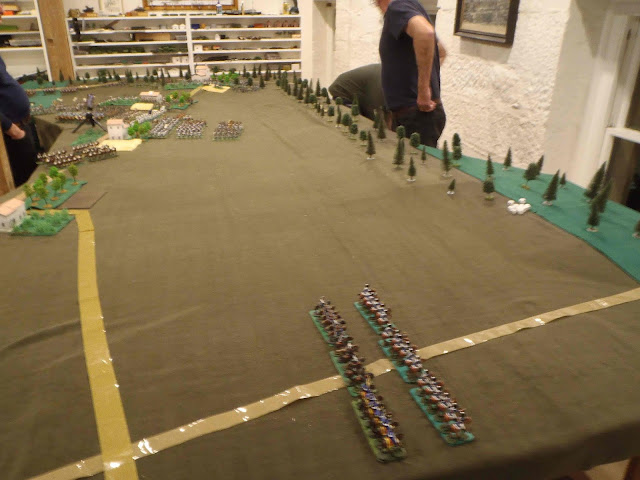 View from the SE at the start with Austrian cavalry in the foreground.  Melas immediately started to move his own corps, the grenadier division & reserve cavalry this way, obviously concerned about his line of communication with his supply base at Alessandria. 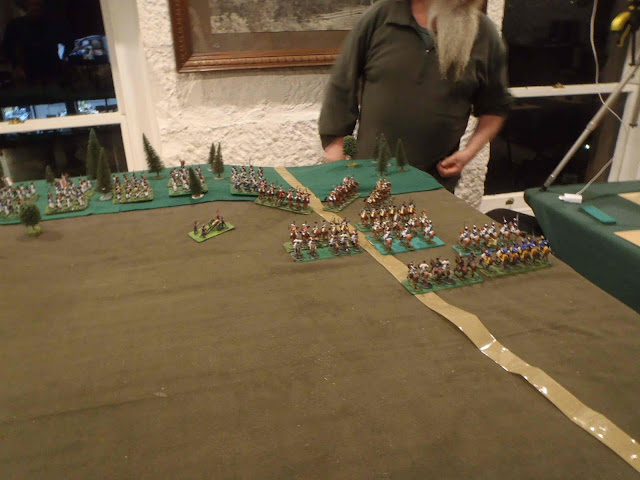 As Melas had expected, large numbers of French appeared down the Valenza Rd & through the woods north of it.  The Austrian cavalry on that flank has attacked the French cavalry as they debouched from the valley. 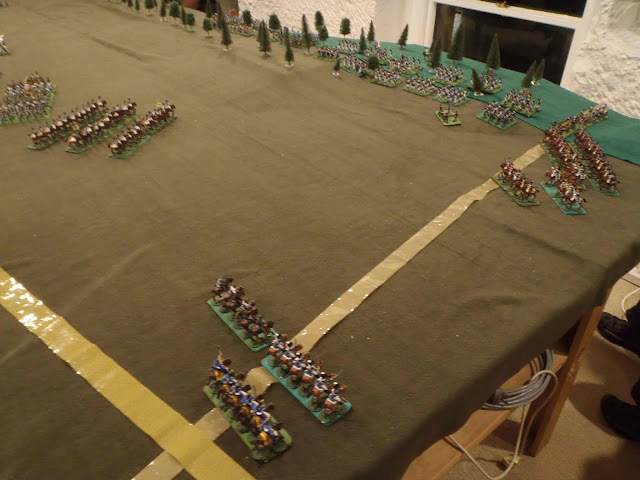 The Austrian cavalry attack was beaten off, but the Austrian reserve cavalry is coming up fast as the French infantry emerge from the woods & their artillery come down the road. 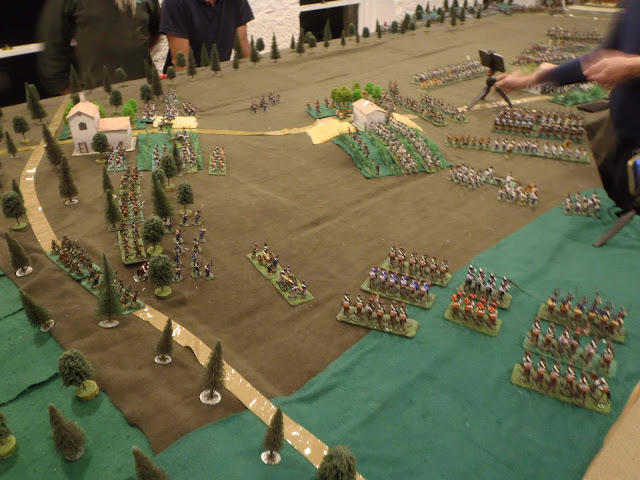 At the other end of the field the Austrians are clearly intending to defend.   Ott's infantry on the Austrian left formed square to face the French cavalry (in foreground).  Suchet is moving up artillery & infantry to support his cavalry.  Moncey's artillery has silenced Haddick's & his infantry has begun to advance. 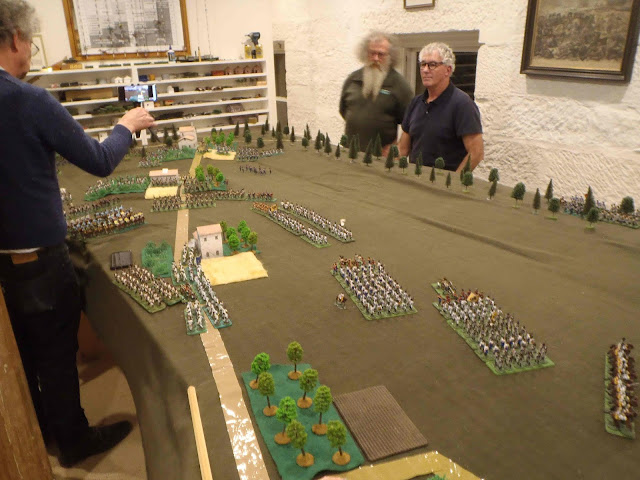 Melas with much of the Austrian army is marching down the table leaving Ott & Haddick to defend against Suchet & Moncey. 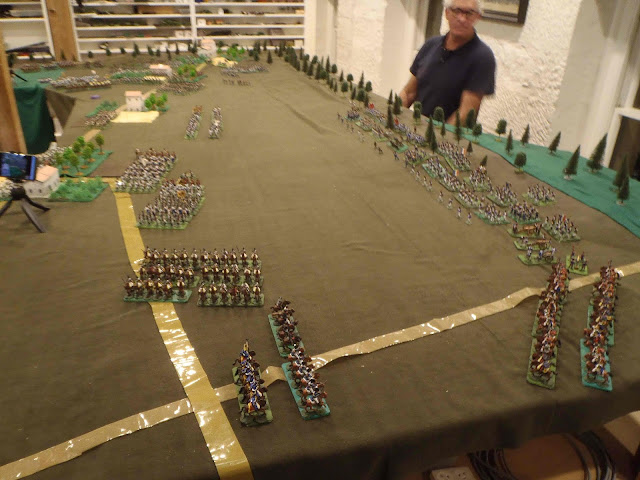 More French are appearing from the woods as the Austrians march east to cover their line of communication & supply. 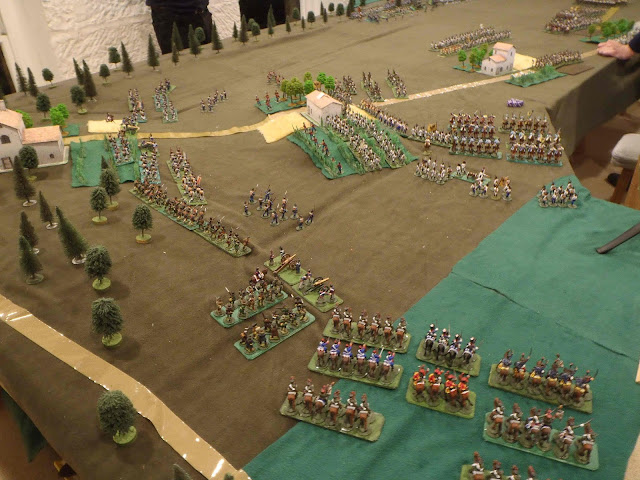 Suchet & Moncey are now advancing their infantry towards the Austrian position as their artillery soften up the squares. 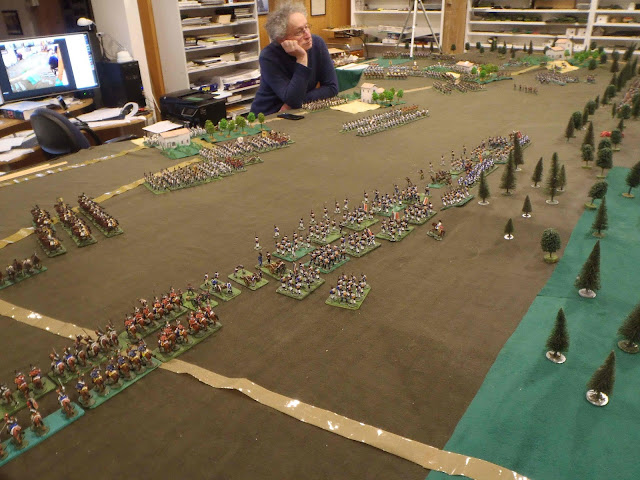 The Corps of Duhesme & Lannes have deployed onto the plain with artillery & cavalry on their left flank. More French infantry have just appeared in the woods on their right.

This is where we got to at 10pm, our usual cut-off time.  There are now about 1,400 figures on the table representing over 100,000 men.  We will continue the battle next Tuesday night.

I thought this post was really well done so I added a link to it in my BEST READS OF THE WEEK! You can check it out at this link if you want: https://bit.ly/36NS2SQ