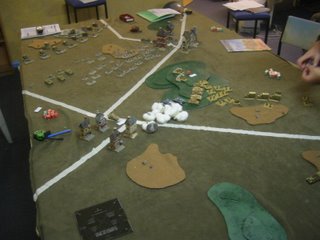 As some compensation for a work trip to Burnie Jim took his K&C to the northern desert to face the might of the DAK.
Jim's K&C Brits attacking Chris' DAK in a 2000pts King of the Hill on 9x5 table. Robert also present for a while.

The King of the Hill is one of the unofficial web scenarios - there's a big hill in the centre of the table. The defender digs 1 platoon in on it with the rest of his army in one corner ready to move up & help. The attacker has 3 platoons in reserve, the rest in the diagonally opposite corner to the defender. The flat top of the hill is the objective.

The Dak had 2 panzer platoons (MkIIIs, MkIII* & MkIV), 2 motorised grenadiers, reece, Pak 38s, 88s & some add-ons in HQ. They deployed the Paks on the hill, the 88s to cover the advance, & the rest rushed forward to help the defence. The Brits has 3 inf, hmgs, mortars, 1 large & 1 small 6pdrs, bugs, Matildas & a double 25pdr battery. The inf rushed forward. The mobile stuff was in reserve, but came quickly and moved up as fast as it could. Brit inf took the hill but were immediately blown back off it by the MkIIIs. Another platoon attacked the MkIIIs under smoke and retook it. The surviving MkIIIs rallied & took it back. Meanwhile the 25pdrs caused great disruption with a well placed Stonk. The Matildas & smal 6pdr plat had taken care of the reece and with the help of the artillery also the MkIVs. The bugs cleaned up a Grenadier platoon before getting blown away by the 88s. Just in time, the Matildas crossed the top of the hill and cleaned up the German HQ on the rear side to force an unwinable Morale test, though the MkIIIs still contested the top of the hill.

Both players liked the scenario. It was good fun & seemed well balanced. The Brits were fortunate in the end - they failed to get uncontested control of the hill, but the German HQ failed their platoon morale & evaporated leaving the coy below 1/2 strength just before the time limit expired for the Brits.
Posted by Jim Gandy at Wednesday, March 22, 2006