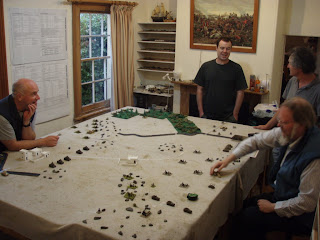 Byron deployed Pioneers on his right, 3MkIIIs right of centre, 6 Neblewerfers in the centre, 3/75mm ACs & 3 Pak40s on the left.
Leight put his 25pdrs on his left, with infantry in front in the woods on his flank, AA in centre & his Lees on his right centre & his Grant HQ on the far right.

Leigh began with an advance on his right. He got rid of the Paks - mostly with artillery fire, but the Lees were destroyed by the Paks & Panzers. The Grants were advancing on the undefended objective on the mountain plateau on the German left, but 4 Pak40s arrived in the right place to defend the mountain top & the Grants promptly fell back.

The British reserevs came on faster than the Germans. The Brit left was strengthened by bren carriers & Valentines while more Valentines & bren carriers plus Crusaders advanced in the centre. In the centre there was a fair bit of actuon between Neblewerfers, carriers, armoured cars & tanks, but the battle was decided on the German right. The Germans attacked thru the scrub with 2 Pioneer platoons, but somehow the single Brit rifle platoon beat one, then died destroying the other. German armoured cars slowly advanced on the objective through the woods & were destroyed while the Panzers tried to cross the river to take on the Valentines before the tanks on the Brit right could intervene. 2MkIIIs bogged & stayed that way while Valentines moved up into close range from both sides & destroyed them. The Germasn struggled on for a little longer, but the battle was lost with the MkIIIs.

Byron had a pretty sound plan - to attack though the scrub with 2 infantry v. 1, but a minor tactical error compounded by bad dice let the Brits win that fight against the odds. The MkIII's could have saved the day, but bad bogging rolls hung them out to dry.

Nick & Mark with fight the other Semi Final between Xmas & New Year to decide who fights Leigh in the Grand Final.
Posted by Jim Gandy at Friday, December 11, 2009