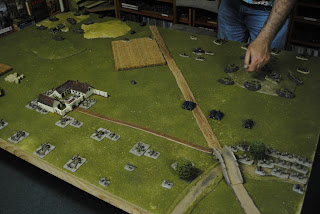 The US deployed with infantry on the flanking objectives, Honeys on their right, artillery on their left and M10's and a/tank guns in ambush. 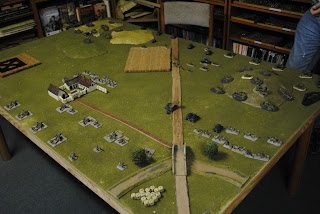 The Hungarians deployed their Paks & HMGs to cover the open ground right of centre with infantry to advance on each side of them, the right hand ones supported by the 38T's.

The US antitank guns deployed in the cornfield but only took out 1 38T before they died under a hail of 105, Pak, HMG & 38T fire.

The Hungarian infantry on the right advanced despite heavy losses from artillery & air strikes.  On the other flank the infamtry was stopped by M10's & Stuarts. 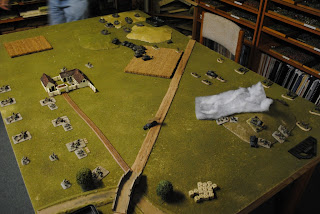 On turn 3 the hungarians charged the hill on their right with infantry & tanks.  The 105's covered their flank with smoke.  Alas, the right dice were not forthcoming.  They drove the GI's back, but the infantry didn't kill enough before the GI's broke off, and then too many 38T's bogged or bailed on the DG hill.  The US were able to continued to dispute the objective gaining time for the cavalry to arrive.

This was a bad mix of mission & terrain for the Hungarian's to attack.  But even so, they could have won it with their immediate attack, but it was a one shot chance and when it failed it was all over.
Posted by Jim Gandy at Monday, January 02, 2012