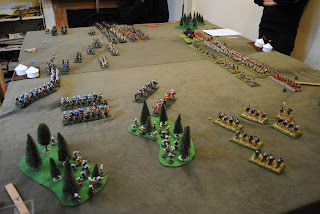 The pics are all taken from behind the Roman right.

The Republican Roman army wasn't quite Kosher to the book of lists as it had an allied Persian division, but the newly painted figs looked so good I had to use them. 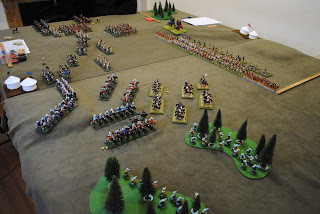 The Carthos put their Citizen spearmen division in the centre with cavalry on their left and Gauls on their right.  Their 4th division of light troops and elephants was in front of and to the right of the spearmen.

The Gauls charged forward (as they do) and the Roman left advanced to meet them.  The Cartho left advanced swinging out on the flank and the Persians advanced cavalry and bowmen to meet them (their medium infantry stayed on the hill). 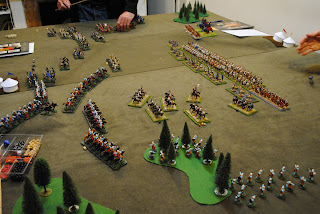 On the far flank the Romans made short work of the Gauls.  On the near flank the hail of Persian arrows took longer, but the Cartho cavalry were gradually melting away.

Meanwhile in the centre, the Cartho spearmen were slowly advancing while the Romans & Persian foot waited on the ridges. 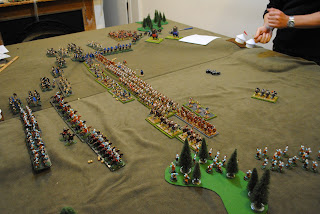 After beating the Gauls, the Roman left turned on the Cartho flank.  The elephants tried to stop them, but there weren't enough of them. 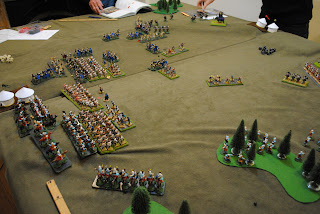 Finally, the Cartho spearmen charged home on the Roman centre.  But the Persians weren't the pushover the Cartho's expected.  They put up a good fight as the legionaries hammered away at the Cartho's right flank.

The Cartho's light division was on the verge of breaking for some time, only holding on by good break dice under flank attacks, but it was the spear division that broke first to give the Romans victory.