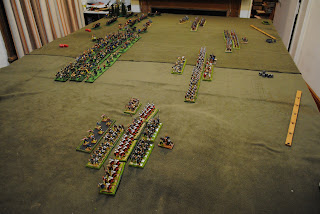 The Romans are on the right in the pics.  Their cavalry is at the far end, with 3 infantry divisions - all advancing but at varying speeds.

The Britons have both cavalry divisions on the far flank, then 2 infantry divisions in the centre overlapped by the Romans. 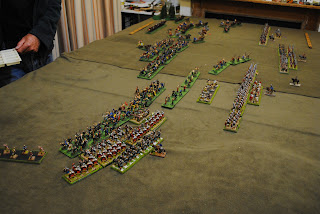 The Britons redeployed to their right so they wouldn't be outflanked and charged the Roman left.

On the far flank the Roman cavalry got hot command dice and swept away much of the Briton skirmish line. 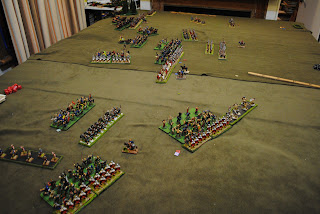 The infantry battle turned into a chaotic mess both sides won some and lost some. 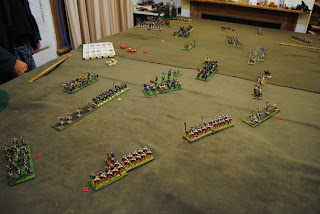 On the far flank the Roman advance was flanked by the Briton's chariots.  Only a prodigious set of dice rolls saved the Roman horse from destruction (like 3 sixes to hit from 8 dice for 2 kills, then saving all of 10 hits on 4+).  But save them they did and then it was all downhill for the Brits.  It seemed that every time the Brits looked like winning the Romans would pull out some hot dice to save themselves.

All the Roman divisions were on the point of breaking, but none did.  Following the example of the cavalry, both Brit infantry divisions just failed to break their opponents then broke themselves.
Posted by Jim Gandy at Tuesday, May 22, 2012