Road to Moscow: Variation of the Road to Damascus Scenario

We used the Road to Damascus scenario from Hail Caesar as the basis for a Napoleonic scenario.  Chris' Russians defeending v. Jim's French.  Rules: Hail Napoleon. 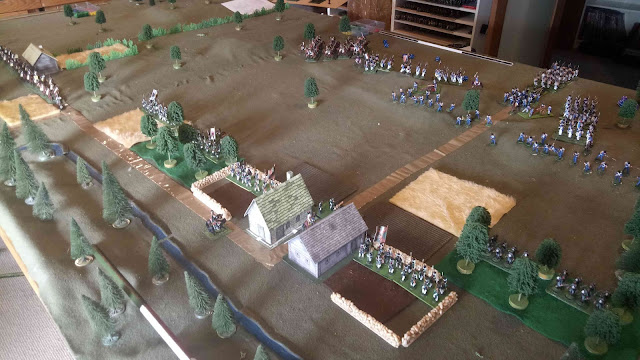 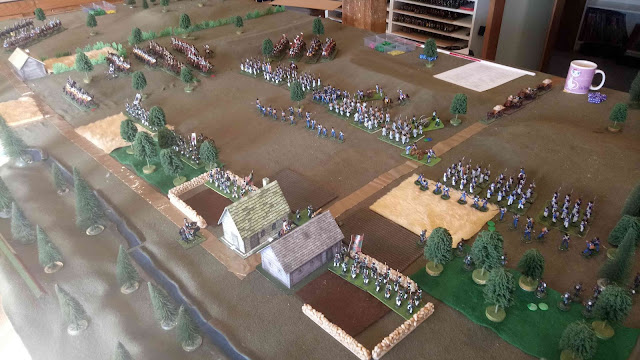 The French sort their brigade columns out into a wall of attack columns with light infantry to the front.  The cavalry of both sides are squaring off mid table. 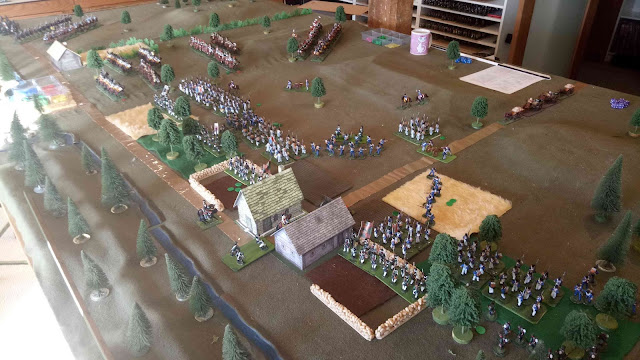 The french columns attack both sides of the village while they deploy artillery & skirmishers to soften up the houses.  The French dragoons are getting the upper hand over the Russian dragoons. 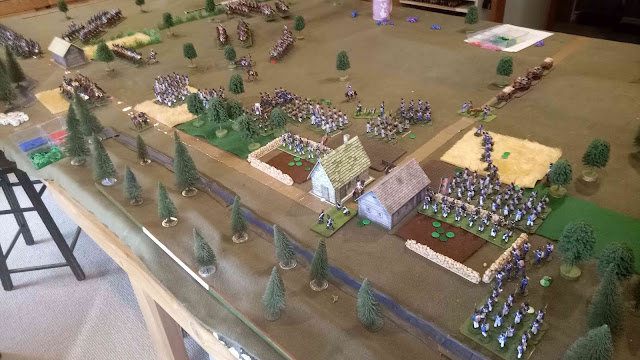 The Russian infantry are stubbornly defending the village, but the French are lapping around their flanks. 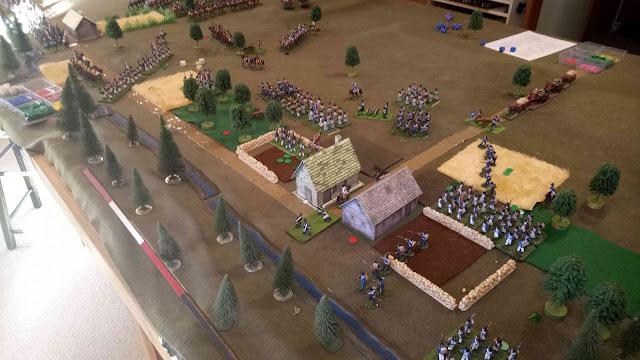 The Russian resistance in the village is collapsing.   The Russian dragoons are broken but the French are so badly hurt they have pulled back to rally.  The light horse of both sides are facing off ina  stalemate with a hedge between them. 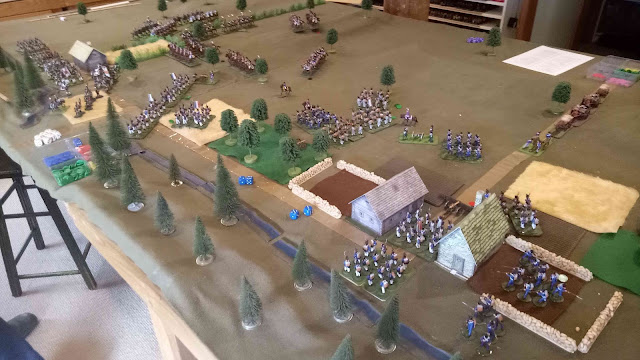 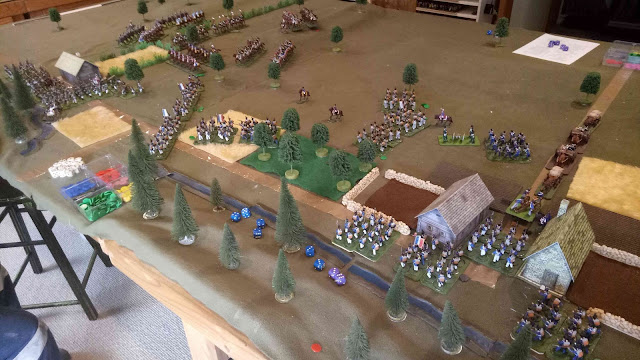 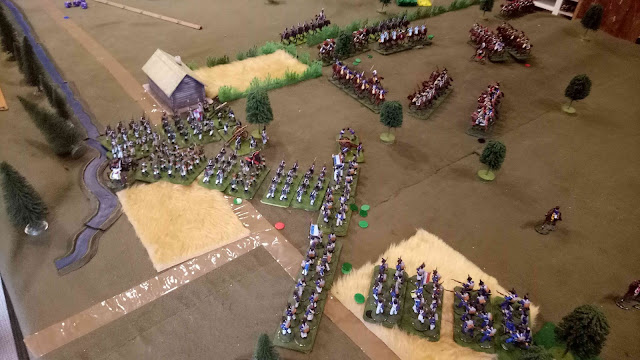 With half the French hussars now deployed facing the Russian battery, the Russian hussars chanced an attack through the hedge & partially broke through.   The Russian inf atry deployment was compromised by a blunder that saw their column charge straight at the French line. 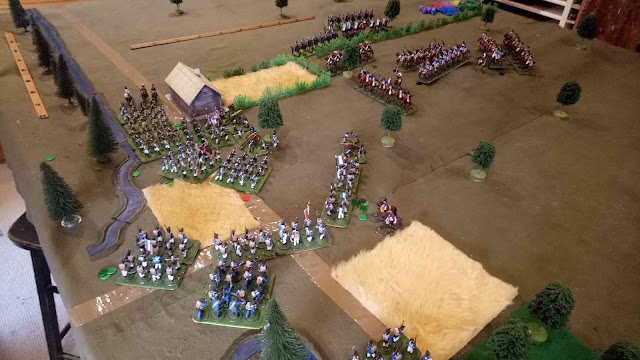 The French dragoons had just enough juice in the tank to send the Russian hussars back over the hedge.   One of French infantry brigades has failed to move up, but the other two are comofrtably holding the line. 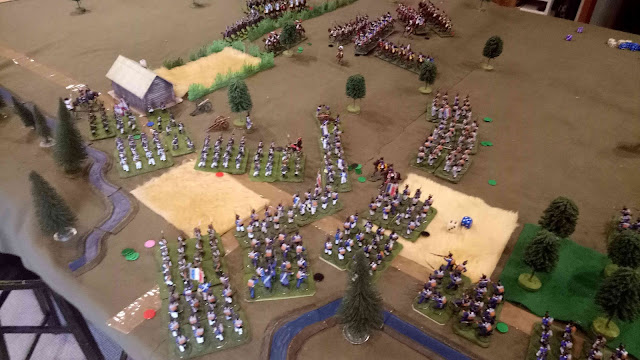 The Russian infantry is making desperate attacks, but the 3rd French infantry brigade finally threw good command dice & came up in a rush. 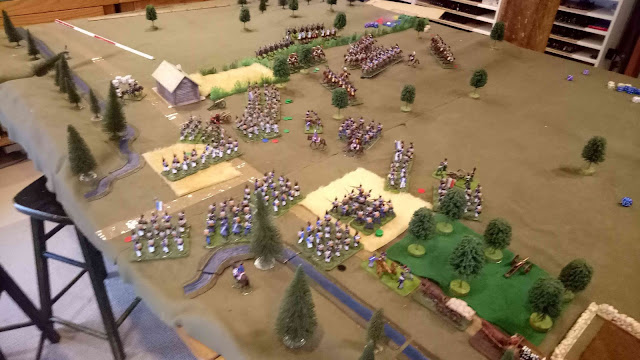 The 2nd Russian infantry brigade had broken & it's all over.

In this version of the scenario, the French had the advantage of good command which helped their sound plan (based on the mistakes made 800 years previously last Tuesday) work almost flawlessly.  They swamped the village defenders before their supports could come up & had time to redeployto meet the counterattack.

So, I have to ask, why modified HS, rather than Black Powder?

Hail Caesar, Pike & Shotte & Black Powder have similar basic concepts, but differ in a lot of detail. As we play in many periods, it is too confusing to use 3 similar but different sets of rules, so we house ruled the set we liked best to make Hail Whoever covering all periods up to 1900.
The Warlords family of rules are all robust rules sets amenable to being customised to suit a wargamer's prejudices & all have scope for modifying stats to simulate troops & weapons for any period. Hail Caesar is the set we liked best, so we used that as our base.
The main issue is that we consider than the shorter move distances the more nuanced combat & Break Tests systems in Hail Caesar provide more scope for skill over luck than BP.