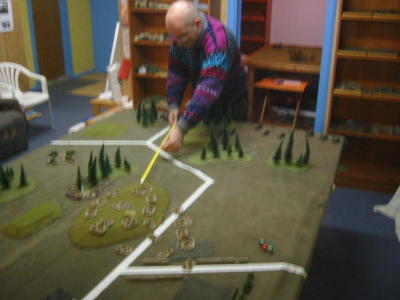 I'm sure Jim will post his news soon, but tonight was a monumental disaster for the US in Sicily.

The Italians were defending a hill, with a 90mm AA gun at each end of the hill . The US deployment started badly, with their Shermans starting off the table. In retrospect, this was what won Jim the game -- as if the Shermans had been deployed on table the US would have done a rush of the 90mm AA guns as their initial move.

Anyway, with only honeys, halftracks, and artillery, the US forces opted to hide behind terrain and wait till the artillery ranged in on the 90mm guns.

The Shermans arrived first turn, but rather than try to rush the guns using their stabilizers, they too hid behind terrain.

On turn 2, the artillery got the range of the AA gun.

On turn 3, the tanks moved up to deal with the AA gun. They missed, so the artillery dropped smoke. Unfortunately, the smoke lifted, and one honey was destroyed.

On turn 4, a gun line of 7 shermans and 4 honeys tanks took out the AA gun.

On turn 5, the shermans moved to take out an AA platoon -- doing significant damage, but not breaking them.

Jim then pointed out that I was over 40cm from the objective, and hence lost under the cauldron rules. :(

If we had continued the Italian army would have been destroyed -- they had nothing left that could take on the Shermans. The US would have slowly pounded the Italians to dust. Oh well -- good to be reminded of such things in friendlies :)

I'm going to finish basing my US infantry ready for this!!!!!