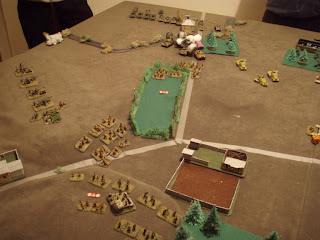 The Brits had M10's, Sextons & Bugs in reserve, 3 Inf, HMGs Hvy Mortars & 17 pdrs on the table. The 17 pdrs were deployed limbered up and moved onto a ridge to protect the objectives. 2 Infantry also moved to the 2 objectives. 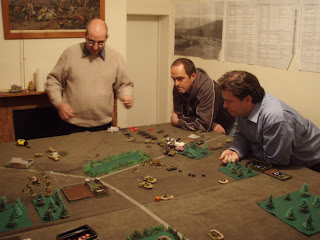 SPAA. The Brits got a reserve early and brought the M10s on behind the Panthers. Caught in a cross fire between the M10s & 17pdrs the Panthers soon died, taking just 1M10 with them. At this stage it looked hopeless for the Germans - but in FOW there's always hope. The MkIVs came on behind the 17pdrs and wiped them out with MG fire in one turn. The bugs & M10s were delayed by the burning Panthers blocking a defile between river & wood. The SPAA held off the attacks of the Brit Rifles and artillery fire (with the loss of one) while the MkIVs attacked the Rifles holding one objective. The MkIVs got beaten off losing a tank, but they returned to the 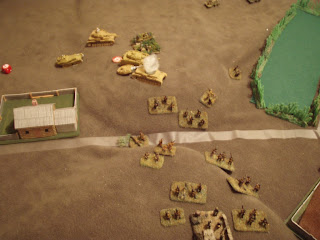 fray & on the second try took ithe objective, though with another tank bailed. The Rifle platoon on the other objective were close enough to counterattack. The Sextons & Heavy Mortars failed to hurt the bailed tank on the skyline, then the Rifles failed tank terror & didn't press their attack. This left the Germans with their 1 operational MkIV holding the objective. Once again the breakthough scenario produced a great little battle with Grigsy managing to manufacture an unlikely win after a major early setback.
Pic 1: Note the pile of burning Panthers.
Pic 2: The MkIVs attacking the objective.
Pic 3: The end - the unbailed MkIV holds the objective as the Rifles refuse to charge the bailed one.
Posted by Jim Gandy at Tuesday, May 27, 2008