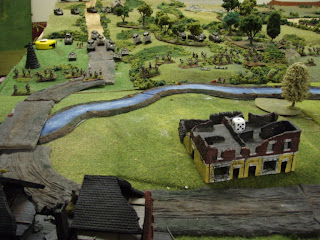 The US Armour had to attack under the Defensive battle rule. The US was an elite force with 2 Sherman platoons, Motorised Mortars, Priests & Recon. It looked totally outclassed by the Russians with a large & a small Infantry, 5 T34/85, 3 KV/85s & 3 SU155s - especially since the battlefield was very densely covered with hills & scrub allowing the Rusian Infantry to form a virtually continuous cordon in the scrub around the US deployment zone.

The bogging rolls hurt the Shermans bad when they attacked the Infantry. Their first attack was beaten off with heavy loss. A renewed attack did break through the end of the line, but by then the T34/85s had arrived & the surviving Shermans were doomed. The flanking force of Mortars had 3 KVs waiting for it so there was no hope there either, so the US conceded.

The pic shows the Shermans attacking the dug in Strelkovy. 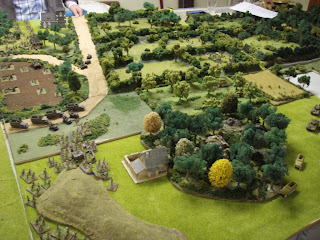 Both sides attacked on their left. The US attack reached the objective but was stalled by a stubborn Panzergrenadier platoon dug in next to it. On the other flank Panzergrenadiers attacked in their HTs. A furious combat ensued after which both sides failed morale and ran away. The Panthers made a last grab for the objective, but they had lost 2 to the USAF and were finished off by heavy A/tank guns. After their loss the Germans failed Company Morale giving the US victory.

Griggsey's table features quite magnificant looking and very dense terrain. Camp Cromwell look like a desert by comparison. The terrain made the US Armour's task in the Breakthough hopeless - if the army lists hadn't already. It was hard to see the equality between the two forces.

The pic is taken behind the US left early in the battle.