FFA on the Russian Front 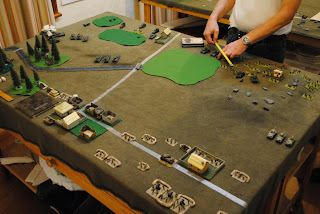 Steve's Russian Tankovy
v.
Jim's  Panzergrenadiers
1750 pts
Pics taken behind German right.
On their right the Russians advanced with T34/76's and IS2's.  On the Left, the Strelk dug in.  The T34/85's in the centre took on the Marders in the village. 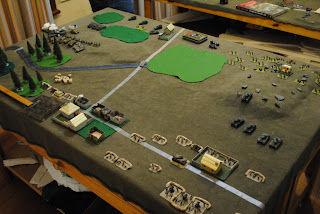 The Stugs popped out on the left of the woods & took on the T34's as Panzergrenadiers advanced through the woods.  The T34's died & the Germans then advanced on the IS2's with infantry, Stugs & Marders.  The IS2's retreated behind the ridge & back onto the objective.

Meanwhile the T34/85's had advanced on the other flank. Too late the Germans realised that they had overcommitted on the left.  The Panzergrenadiers & Werfers couldn't stop the T34's over-running that objective.
Posted by Jim Gandy at Tuesday, March 29, 2011