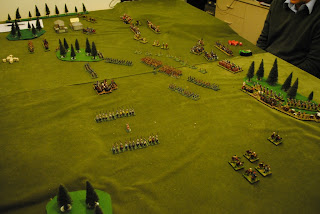 The Hungarians are on the left in the pics.  Both sides put most of their cavalry on their left which resulted in a good deal of milling about before the armies got to grips. 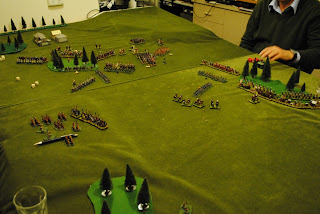 The Hungarian right degenerated into an indecisive shooting match after the Hungarian heavy cavalry was sent to the left.

The Hungarian spearmen in the centre pushed forward supported by handgunners each side & cavalry behind.  One of the units got charged by the best Ottoman cavalry and was ridden down.  The other chased lesser cavalry around until they were provoked into charging and destroyed.

On the left, there was indecisive skirmishing until a Hungarian heavy cavalry arrived and broke through.  But like the Ottoman cavalry in the centre, the victorious cavalry pursued out of command range and didn't return.

Left of centre, Ottoman cavalry broke the handgunners, then the light infantry behind in a follow up charge & after a struggle the heavy cavalry behind them.  This put the Hungarians on the verge of army morale failure.

On the right of that, the Hungarian Guards where getting the upper hand over Ottoman cavalry when another ottoman cavalry unit joined in.   This combat locked up into an indecisive sugging match until we ran out of time & called it a draw.

It's an interesting period, but unfamiliarity with it caused a bit of confusion re troops classifications & the battle didn't go quite as smoothly as usual, but we bumbled on regardless & had a good time.  It was good to get some input on the rules from outside the usual mob.
Posted by Jim Gandy at Friday, March 04, 2011