We had a good turnup for Nick's monthly garage day - 9 blokes including Mike Chevak who I haven't seen for 30 years (on hols in Tas).  We fought a hoplite battle with the same troops as at Nicks a few months ago - then using FOG.  Carl, Mark & Tony commanded the Spartans, Steve and Mike commanded the Athenians, I umpired.  Nick, Byron & Leigh also present. 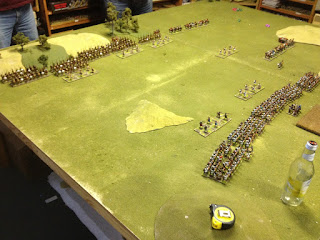 All pics taken on iphone from the Athenian left.  Both sides put their cavalry on the far flank.  The Athenians advanced their skirmishers & cavalry (with Mike in command of them, what else would the cavalry do?), but otherwise stood and waited.

The Spartans made a general advance, somewhat slowed by their right flank being a tad reluctant. 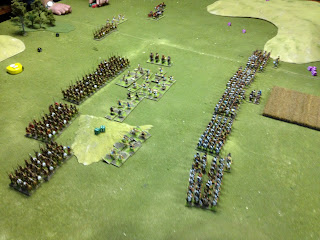 The cavalry fight on the far flank was quickly decided in the Spartan's favour.  But Mark's Spartan cavalry had lost enough for Mark to have to spend some time rallying before renewing his advance. 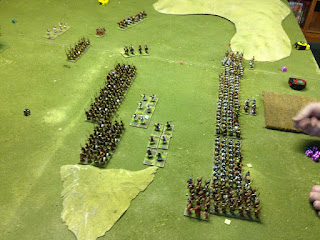 Tony's Spartans overlapped Steve's left and attacked his flank.  Steve somehow beat the attack off but not without heavy losses & after a bit of rallying Tony's division still threatened to roll up the Athenian line. 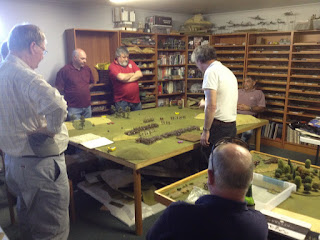 Steve counterattacked in the centre and advanced his right against Mark's cavalry.  The front line of Spartans in the centre was broken, and after beating Mark's cavalry, the Athenian right wheeled left and attacked the Spartan's exposed left flank. 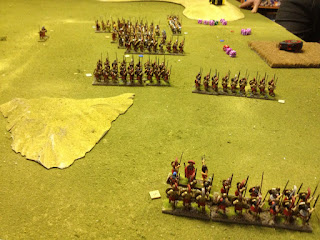 But at the same time Tony was attacking the Athenian left flank.

The Athenians broke first to end a battle with wildly fluctuating fortunes.

As Carl doesn't come to Camp Cromwell we fought this battle with no house rules.  There really wasn't a lot of difference to how it went, but I think our tweeks do remove some of the odder things that can happen & make the game go a bit quicker.