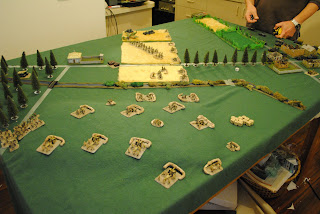 The Hungarians moved infantry onto both objectives & dug in.  Both sides exchanged shots waiting for the German reserves to arrive on turn 5 (now automatic if they haven't come earlier). 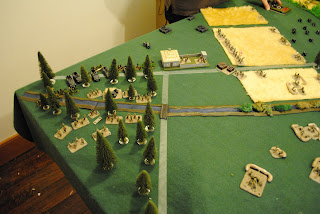 The Panzergrenadiers from reserve attacked the infantry in the wood defending the rear objective and drove them back over the river.  The Hungarians moved their 38-T's across to counterattack the panzergrenadiers from the rear.  The Germans broke, were caught between 2 platoons and were destroyed. 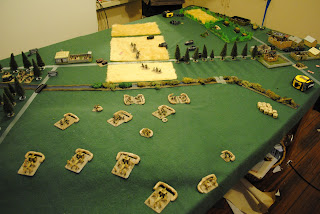 The Germans then attacked the forward objective with their other panzergren platoon. The got past the weapons platoon, but a counterattack by infantry & 38-T's destroyed them.  The Hungarians then won with no Germans within 40cm of an objective.