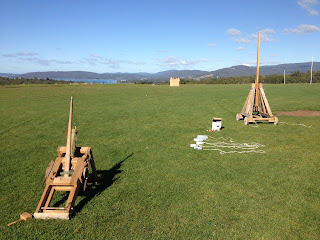 The son in law of a friend asked me to give a talk on war engines to the grade 8 science classes at St Aloyisus School.  I did my powerpoint from last year's Heritage Engineering Conference, then gave them a demo on the oval.   The woodworking class made up target in the form of a wood and cardboard castle about 2.4m square.

I set up my small treb in wheeled mode with just 40 Kg power.  This is less than half its limit, but at that it's easy to operate, safer and still can throw a bocce ball a serviceable distance - about 60m on a fairly flat trajectory - ideal for hitting a vertical wall. 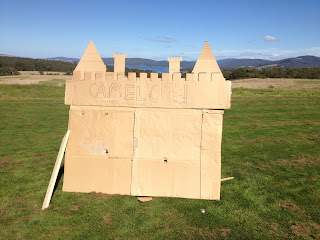 The treb was hitting the target about 50% of the time with the rest being near misses - mainly due to a variable cross wind.  The balls made clean entry holes in the front, but most hits resulted in a satisfying spray of pieces of wood as the backing structure shattered.  The best shot hit an upright and flattened the whole thing.

I also took my onager.  It was throwing cricket balls about 70m, but with a high angle that made hitting the target very difficult in the wind conditions. 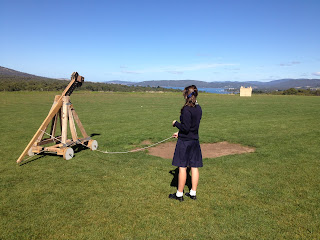