Scenario 3: Point Defense:  Mike's US v. Steve's German Vets.
The Germans have to defend 3 objectives on their side of the 6x4' table (LHS in the pics).  They have half on at the start with half coming as reserves on turn 2.  The attackers have none on the table at the start, but can have all come on on turn 1.  Same forces as last week. 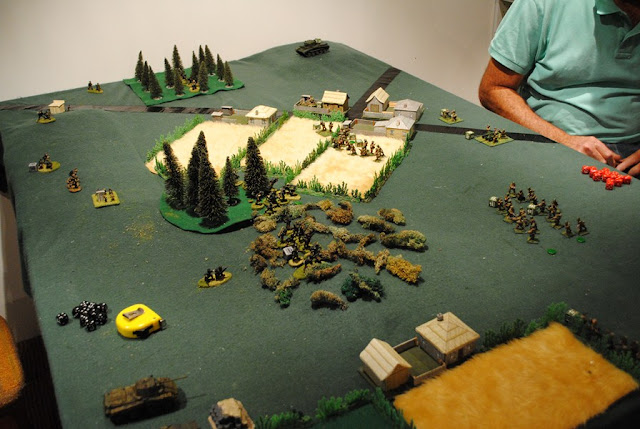 The Germans adopted an active defense, pushing forward in the far wood and in the centre.  They use their armoured car & half track to defend their right.  A mortar & HMG proved support from the ridge left of centre, armour on their right & anti-tank in centre rear.

The US sent 1 GI squad down their left, 2 left of centre & 1 right of centre.  Their armour is on their right, support weapons in the centre. 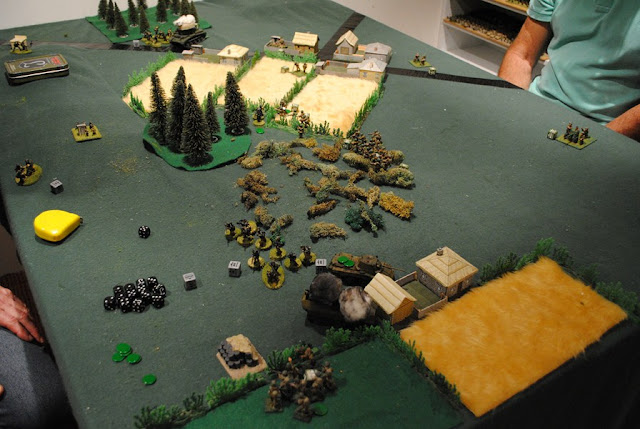 On the far flank the allied Cromwell was bushwhacked by German infantry as it tried to rush past the wood.  It died with a panzerschrek up the clacker.  On the left, the GIs have slipped past the light armour & taken the objective (the 6pdr got the half track).  In the centre the concentrated US attack has all but destroyed the German centre as they withdrew  a squad to defend the near objective. 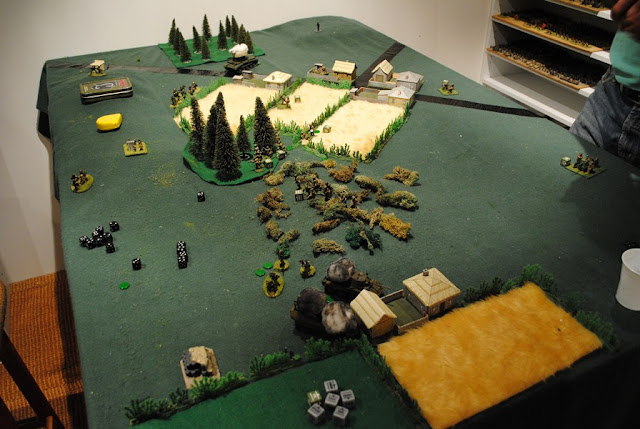 It was looking hopeful for the US, but the end game suddenly went pear shaped.  The German mortar ranged in on the guys on the objective killed most of them and the rest bugged off.  Then the dice for an extra turn didn't allow the US the extra move they needed to grab the central objective.

The US did well tactically despite the terrain slowing their advance, but despite far higher casualties, the Germans won as no objectives were taken (1 taken = draw, 2 taken = attacker wins).

Looks like a good game. It's caught on rather fiercely up here.