We used the rather crowded table prepared for the FOW battle to be fought tomorrow.  Each army had a cavalry division of 4 units and an infantry division of 3 pike & 4 shot.  The Scots had a commanded musket unit, Parliament a dragoon unit.  The Scotts cavalry was weaker than Parliament's, but to compensate they had a medium gun.  All commanders were 8 to keep it simple. 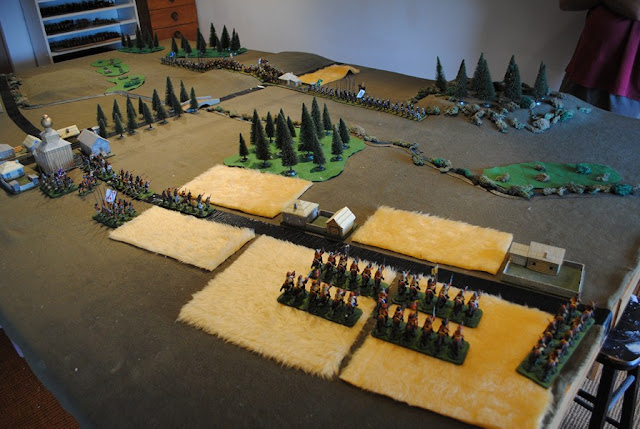 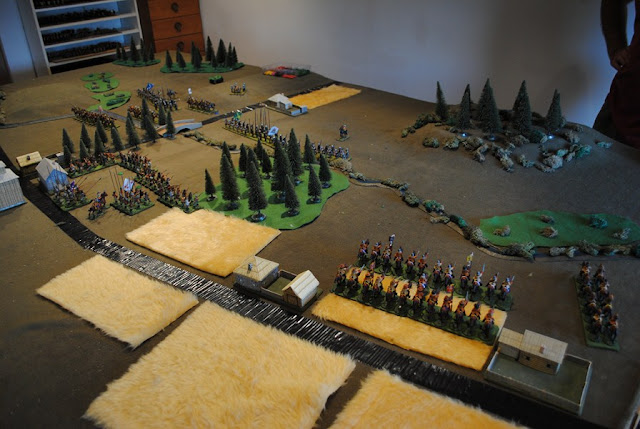 Both sides tried to advance but their cavalry was slowed down by the terrain.  (All troops were restricted to one 6" move in the corn fields, woods and crossing the creek or tree lines).  The Scots infantry on the far flank formed column and began marching to the other flank. 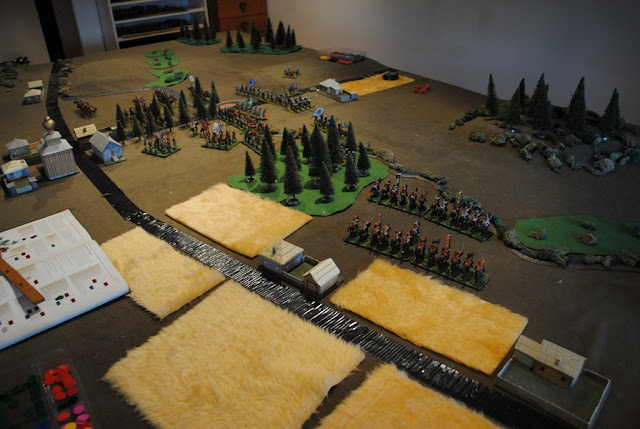 One Parliamentary musketeer unit is on the road in the trees covering the flank, the others are lining the creek line with the pikes in support.   The Scots charged over the creek but were beaten off. 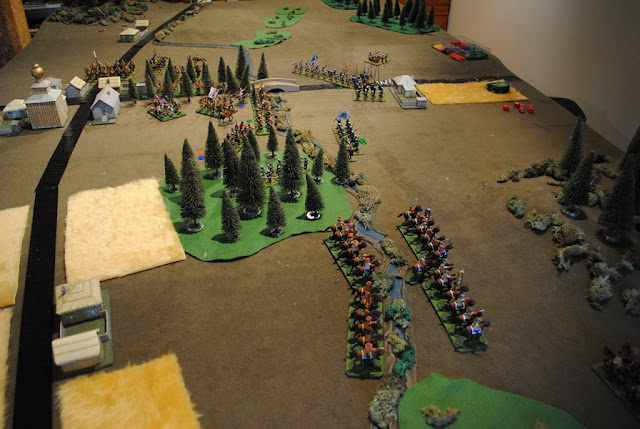 In the foreground the Parliamentary cavalry are slowly making progress.  On the far flank, the Scotts cavalry is working its way around the flank.   In the centre the Scots have a hole in the front line following their failed attack.   The infantry from the far flank suddenly found themselves in the front line and had to get out of column. 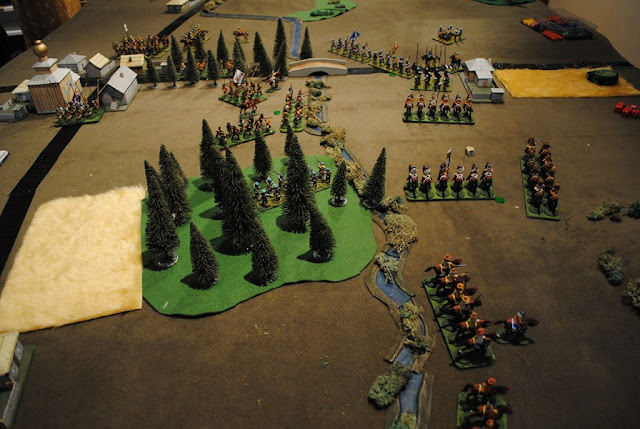 The forward units of Parliament's horse have ridden down a musketeer unit but the next line managed to form hedgehog in time. The Scots commanded musketeers got over the creek to the safety of the wood.  Parliamentary pikemen block the road through the village. 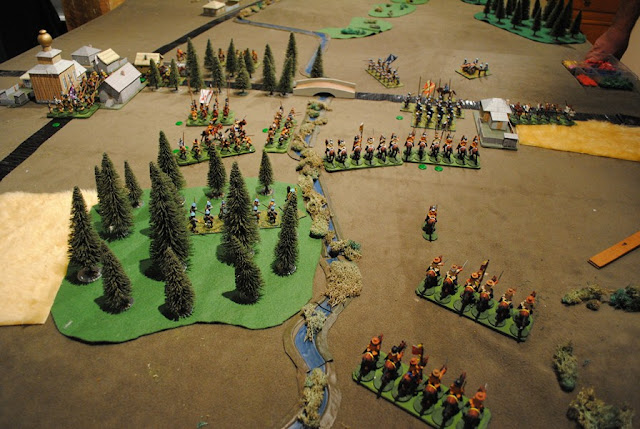 In the villlage the pikes block the road but the Scots cavalry git past the crossroads and are using their pistols on them while a second unit turned left and charged the musketeers on the road in flank.  Parliament's dragoons have dismounted in the cornfield and are moving around the Scot's flank. 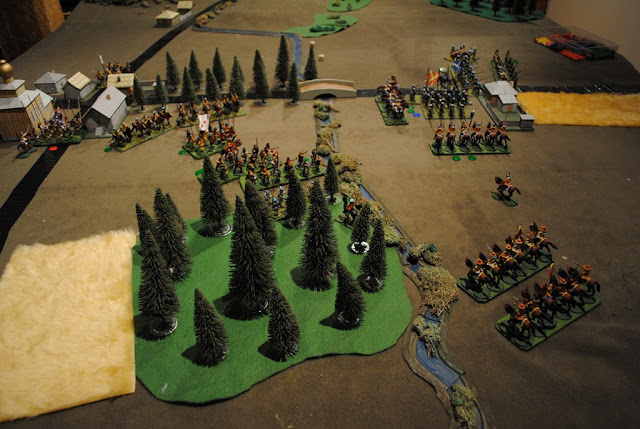 The second wave of Parliamentary cavalry had advanced up the river behind the first line which was caracolling the hedgehog, but when ordered to cross the creek to assist the foot it blundered back 2 moves instead leaving the foot exposed to attack by horse on one side and the musketeers in the wood on the other.  The dragoons flank attack was intercepted by Scots musketeers. 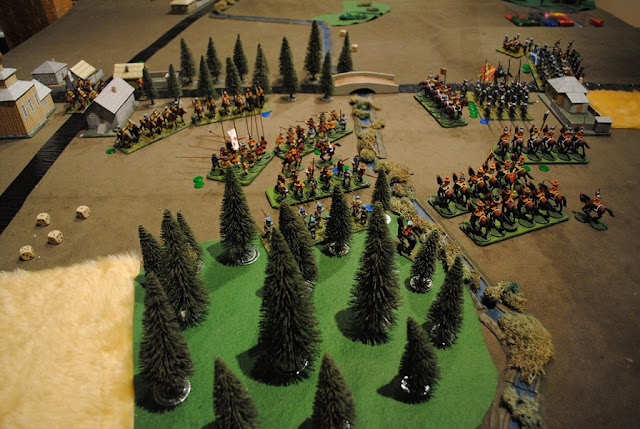 The dice gods had now deserted Parliament big time.  While the Parliamentary caracolle was doing bugger all the Scots caracolle broke the pikes in the village exposing Parliament's flank. 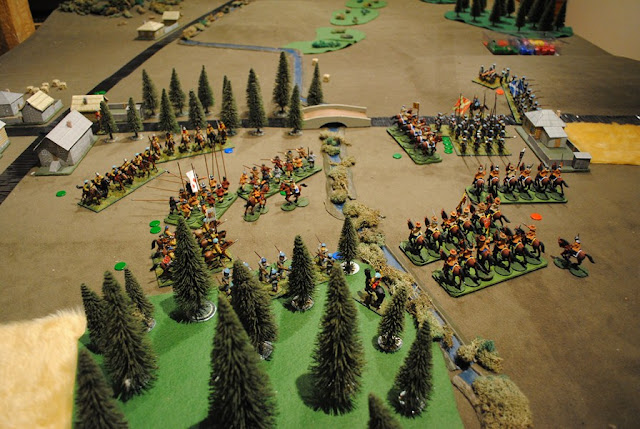 Suddenly it all fell apart for Parliament. The 2nd line of horse was slow to return from their blunder & the dragoons broke.  The Scots horse came out of the village, got 3 moves, charged the flank of the foot facing the musketeers in the wood and broke them.  With that the Parliamentary foot division broke and that was the battle.

It was the most crowded battlefield we've ever used for pike & shotte and it certainly changes the game.  Neither side really handled that well, but Parliament seemed to have the battle well under control having got the Scots foot on the verge of breaking early on.  But they just couldn't get the extra unit before a string of bad luck handed victory to the Scots.   This happens sometimes, but it's a consequence of an exciting game system, win or lose it was a very enjoyable little battle - proving again that you don't need big armies to have fun with the Warlords rules.
Posted by Jim Gandy at Saturday, December 29, 2012