Hold the Line with Bolt Action

As a change we played Bolt Action using the FOW Hold the Line Mission.  Both sides had 2 players each with a platoon and totaling about 1770 pts a side.  10'x6' table.  Mike = US, Joe = Brit against Jim & Steve, both with panzergrenadiers.  The Allies defended, mostly putting the Brits on the table as their half on, with US as usual to turn up later as Reserves.  The Germans had Jim on the right and Steve on the left...pics taken from German rear or right flank.  The RH bridge & the farm in the Allied rear are the objectives.
We tweaked the BA Hidden rule to Dug In = hard cover (+2 to hit) with all defenders foot squads on table at the start being Dug In until they move.  We used the BA Reserves Rule as is.  Attackers take an objective by having troops within 3" of it but no defenders within 3" of it at the end of a turn. 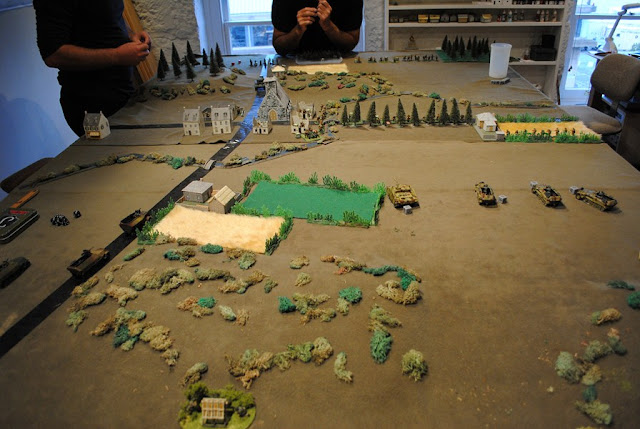 Steve's platoon on the left was elected as the target of the British artillery and was consequently delayed.  Jim's Stug & Steve's werfers engaged the anti-tank guns as the Stug & Hanomags rushed forward. 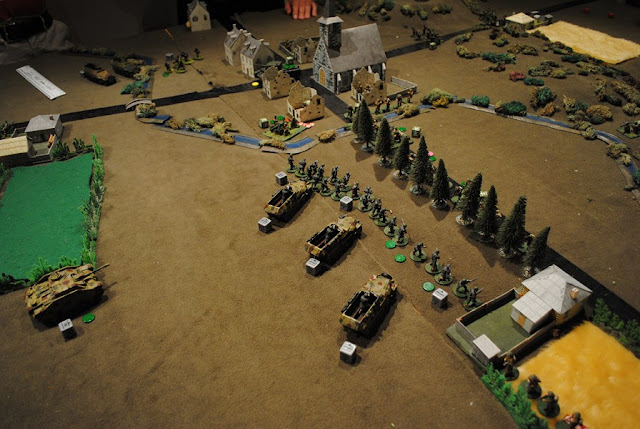 The anti-tank exchange was singularly ineffective for both sides.  The Cromwell rushed up the road from reserve & joined in also without effect.  Jim's infantry dismounted close up. 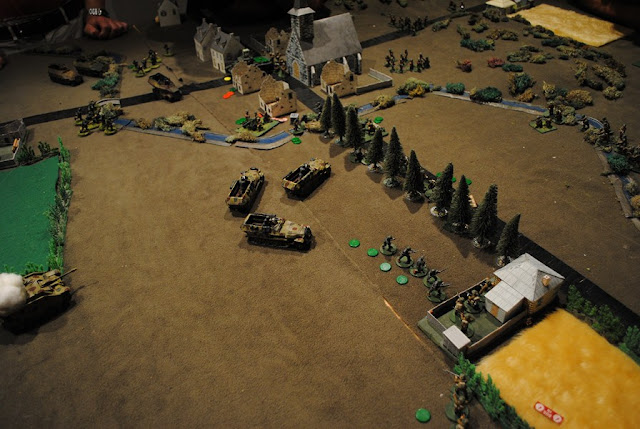 Jim's RH squad got pinned down, but the other one & the HQ stormed the bridge.  The werfers continued to fail to hit & the 6pdr finally got the Stug while the Cromwell was taken out by multiple hits by panzerfausts.  The Americans are rushing to the rescue. 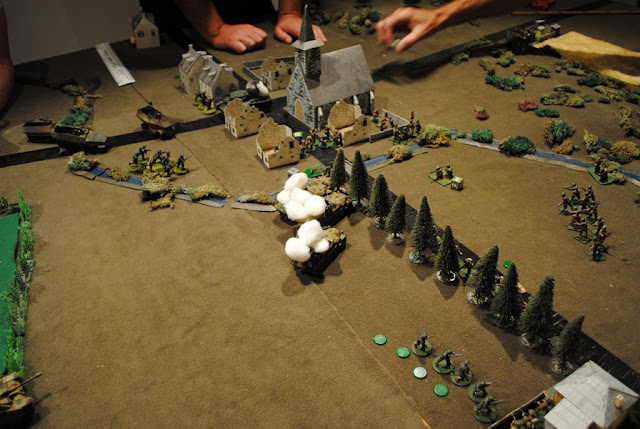 Jim's Hanomags have been destroyed before the anti-tank could be taken out and his infantry is melting away, but Steve's troops are now sweeping through the village to meet the Americans. 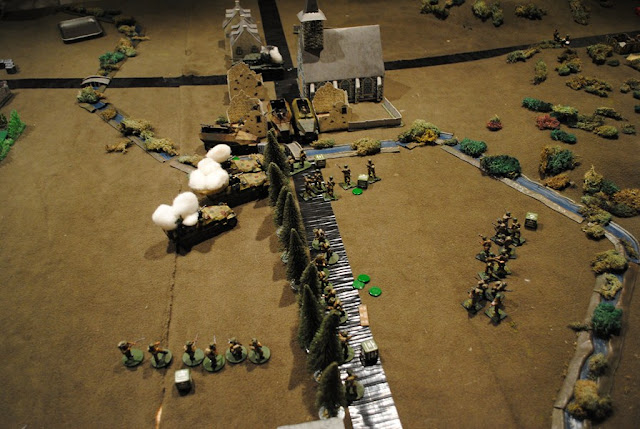 A vicious series close combats has left the bridge still in dispute with both side still having squads within 3"   This was the end of turn 7 & after 11 o'clock, so under FOW rules it is an Allied victory as the attackers have failed to take the objective before time runs out.

The FOW mission (with a few tweaks) worked fine.  We did find one problem with BA used for large team games - in normal IGUO systems multiple players on the moving side can do a lot of stuff concurrently, but this is not possible with the BA command system where you have to do one squad at a time, thus large multiplayer games can take longer than one might like.
Posted by Jim Gandy at Wednesday, December 19, 2012

It's interesting seeing how this works in a bigger game. We've been keeping things quite small, so it's a different dimension of the game.